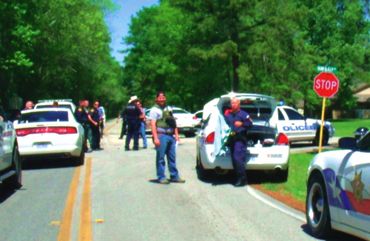 END_OF_DOCUMENT_TOKEN_TO_BE_REPLACED

EAST HARRIS COUNTY  An unusual head-on crash of two motorcycles took the life of one of the drivers, and severly injured the other, according to the Harris County Sheriffs office.

Investigators said that apparently the Yamaha motorcycle, headed westbound on FM1942 crossed over to the other lane on the two lane road, striking a Harley Davidson head on. This ocurred at a bend in the road, near Barbers Hill Road. The Harley Davidson cycle was headed eastbound. The driver of that bike died at the scene, according to emergency personnel. The Yamaha slid on its side into oncoming traffic, and that driver was seriously injured. He was LifeFlighted to the hospital.

The names of the two motorcyclists have not been released at this time. Anyone with information is asked to call the Sheriffs office, 713-221-6000