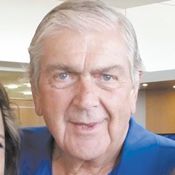 Dickie Woods, born Carl Raymond Woods on April 7, 1940, passed away on April 16, 2016. He grew up in Sweetwater, Texas and was co-captain of the 1957 State Finalist Sweetwater Mustang Football team.

He went on to attend Rice University in Houston, TX on a football scholarship and played in the Sugar Bowl, Orange bowl and the Bluebonnet Bowl. Upon graduation, Dickie joined the Texas Air National Guard after marrying his high school sweetheart. He then moved to the east side of Houston and earned his pilots license and started his long entrepreneurial career. He bought his first business in 1966 and continued building and developing businesses in the North Channel Area throughout the 70s and 80s.

In 1985 he acquired Banana Bend Beach Park and brought his family to the Highlands area. Dickie began investing in the Highlands community and he joined the Highlands-Lynchburg Chamber of Commerce where he served many years in the board and multiple terms as the Vice President and President. His love for the community and its people translates through the many projects he initiated and supported. He was a long time member of the Northshore and Highlands Rotary Clubs, the Citizens Bond Advisory Committee for GCCISD, and President of the local county water board. He supported the local first responders and law enforcement initiatives and worked with county officials to bring improvements to the community that he loved. Dickie was also a great supporter of local youth programs through sports organizations, boy scouts, partners in education and the Goose Creek Education foundation. In 2006, he was recognized by the community for a lifetime of service and achievements with the Terry Davis Memorial Award.

Dickie enjoyed hunting and motorcycle trips with his buddies and spending time with his family. He loved touring the state parks with his wife of 54 years, Virginia, and their five grandchildren; Kenneth Michael McCann III, EmmaLee Lopez, Logan Lopez, Sarah Woods and Hunter Woods. He is also survived by his three children; Jennifer Woods-McCann, Jessica Woods-Lopez and Moises Lopez, and Dickson Woods and wife JoEllen, his sister Estelle Councilman of Sweetwater, TX, his brother Floyd Woods also of Highlands, TX. and nine beloved nieces and nephews.

Dickie is preceded in death by his Father Carl Dick Woods and his mother Thelma Francis Woods.

Dickie Woods, cherished Husband, Father, Grandfather, Brother, Uncle and friend to all he met will be missed. A Celebration of Dickies Life will be held on Sunday, April 24, 2016 from 2pm-5pm at the San Jacinto Community Center 604 Highland Woods Drive Highlands, Texas 77562. Donations can be made in Dickies memory to the Highlands-Lynchburg Chamber of Commerce Dickie Woods memorial scholarship fund. Services have been entrusted to Sterling-White Funeral Home 11011 Crosby-Lynchburg Rd. Highlands, Texas 77562. To send the family condolences please visit www.sterlingwhite.com 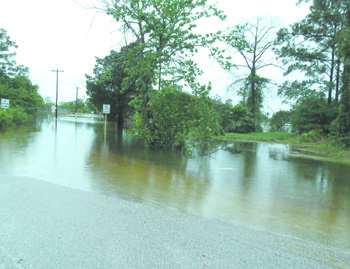 EAST HARRIS COUNTY  The balmy and beautiful Sunday yielded to a fierce, hammering thunderstorm with over 100 lighting flashes a minute during the wee hours of Monday morning.

A storm cloud spread from Waller to Chambers Counties dropping from 10 to 20 inches of rain. The width of the deluge surge caused over 2000 flooding emergencies in Harris County alone.

In Crosby and Dayton 13 inches fell in less than six hours.

Thus far eight peoples deaths were counted as being storm related. That toll is expected to rise as water recede.

Some 123,000 were struck without power during the storm.

Governor Greg Abbott declared a State of Disaster for nine counties related to the deluge.

Harris County Judge Ed Emmett made an emergency declaration acting as chief administrator for the Harris County Court. This storm has set records

Harris County, TX  Harris County Sheriffs Office Marine Unit along with the United States Coast Guard recovered a body of a male who drowned, after the tug boat he was working on submerged for an unknown reason on the San Jacinto River in East Harris County last Tuesday morning, April 19, 2016.

HCSO Marine unit was dispatched at around 9:00am to the San Jacinto River Bridge and Interstate 10 East. The tugboat had a crew of 5 working, when it became submerged.

HCSO marine personal rescued four people from the river to safety, but a fifth crew member was unaccounted for.

His body was located a short time later, and a Coast Guard boat assisted in recovering that victim.

The Coast Guard will determine how this maritime accident occurred.