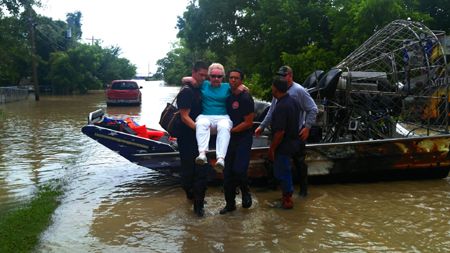 Emergency First Responders were busy evacuating residents last weekend, as flood waters from a week of heavy rains north of Houston rose quickly in low lying areas around the San Jacinto River and the I-10 bridge.

The Channelview Fire Department reported that they rescued 35 persons, in a borrowed airboat. Highlands Fire Department responded to multiple calls, working on both sides of the river because some departments were short of rescue boats.

Highlands recently upgraded their boat with a 50 HP motor, necessary in the rapid flow of water in the San Jacinto River.

Highlands FD worked on rescues in Banana Bend, Highlands Shores, and even Rio Villa on the west bank. As of Tuesday, waters had crested and the calls were subsiding, chief Harvey Little reported.

Other flood damages included closing part of the Houston Ship Channel on Sunday. The Lynchburg Ferry has not run for three days, and may not resume for several more. About 12 barges in the area around the I-10 bridge were floating loose, and Kirby Inland Marine worked to resecure them.

Portions of Market Street that run to the Southwest Shipyard were washed away, and emergency repairs by the county were underway on Tuesday.

The 3 photos are from a high water rescue CFD made today 5/30/2016. We were able to evacuate 35 people from the San Jacinto river bottom near I-10 thanks to the volunteer help of a Non-Profit organization called Houston Area Off-Road recovery. They provided an Airboat and 2 Jet Skis to assist us in our efforts. No one required Ambulance transport and all residents were removed from harms way without any incident.