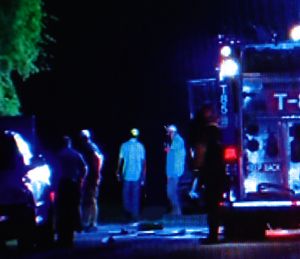 CROSBY  Firefighter Kevin Barker may well have saved a resident last Saturday when he braved a fence, a dog and a locked door to get the man out of his smoking house.

Harris County Fire Marshals investigated the blaze and determined that there was cause to do an extensive investigation. The fire may have started in as many as three locations. An arrest for trespassing was done by Harris County Sheriffs Deputies of a couple found to be dwelling nearby behind the residence. The Harris County Fire Marshals Office were going to interview the couple however the initial contact Sunday morning found the two incapacitated. On Monday, they declined to speak to investigators without legal representation.

First Assistant Chief Russell White said that Barkers injuries were not extensive and he was treated at the scene. Another fireman was said to have suffered heat prostration battling the blaze and was treated and released by Methodist Hospital San Jacinto. Ulrich was not injured.

According to White, Crosby Volunteer Fire Dept. has determined it was a two alarm blaze because we thought several times we had knocked the fire out but it got into the attic with plenty of fuel throughout the structure. We had to add to our efforts several times.

The crews were on hand far past the 7:30 tap out however, the FM 1942 was closed throughout the combat of the blaze. Thereafter as law enforcement and the Fire Marshals probe there was limited passage as fire trucks and first responder vehicles were on the scene.

END_OF_DOCUMENT_TOKEN_TO_BE_REPLACED 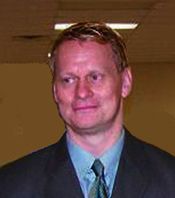 GALVESTON  Riku Melartin, 54, was sentenced twice by the county court system last week. In a jury trial, he was found guilty of attempted bribery of a police officer, stemming from a DWI traffic stop in June 2014 in Kemah. The judge sentenced him to 11 years in Texas prison and a $10,000 fine, but he is able to appeal the sentence, according to the Galveston County District Attorneys office.

He also was found guilty of the DWI charge, pleaded no contest and received a 25 day jail sentence for that charge, of which 15 days had been served.

Melartin is best known for his association with the Keating Chevrolet dealership in Crosby, owned by his wife Tina Jou. He made a series of TV commercials showing him holding a gun and nicknaming him The Finnisher a reference to his Finnish heritage and his actions in stopping an armed robbery in his neighborhood in Bellaire.

However it was at that dealership that he allegedly sexually assaulted an underage girl who was working there. He has been charged with 3 counts of assault of a minor, but that trial has not been heard. He had been released on bail on those charges.

In the bribery trial, prosecutors showed dashcam video from a Kemah police cruiser, allegedly showing Melartin attempting 3 times to bribe the officer with money in exchange for releasing him. The trial by jury was held in Galvestons #405 Judicial Criminal Court, with Judge Michelle Slaughter presiding. The judgement was rendered on August 1, 2016 and the sentence was to begin immediately.