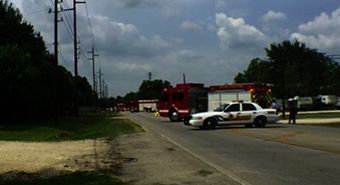 HIGHLANDS  A Precinct 3 deputy constable was the object of an unusual personal attack last Saturday afternoon, in the driveway of his home.

The deputy answered a knock on the door of his home, to be confronted by an unknown male who asked if the patrol car in the driveway was his. The officer responded yes and then was asked to show his badge. The intruder said he was looking for a different officer.

Due to the strange way the man was acting, the officer went into his home, got his gun and badge. But he also called for backup.

At this point, the suspect entered his auto and attempted to run over the deputy, and to pin him against a fence.

Then he put the car in park, got out of the car, and threatened the deputy by saying he was going to cut him with a knife. As the suspect approached the officer, he refused to drop the knife, and the officer fired twice at him with his gun, hitting him in the abdomen. The man was subdued, and taken by LifeFlight to the hospital, reportedly in critical condition.

Authorities said that the man admitted to being under the influence of drugs and cocaine. However, a motive for the incident has not been established, and the whole event is under investigation.

The 29 year old officer, who is a five year veteran of the constables office, was placed on administrative leave pending the results of the investigation.

North Main Street was closed for several hours on Saturday as authorities conducted the full investigation. 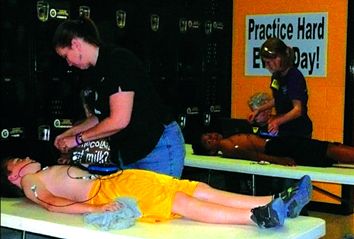 ECG tests for students and adults this Saturday

CROSBY  ECG Screenings are going to be performed at the Crosby Community Center this Saturday from 9:00 a.m. until Noon by the Cody Stephens Go Big Or Go Home Memorial Foundation to the general public from 7th grade and up, not just first year athletes or children.

The Cody Stephens Go Big Or Go Home Memorial Foundation was begun by Scott and Melody Stephens following the death of their son, Cody, May 6, 2012 to Sudden Cardiac Arrest also called sudden death.

When that happened only about 5% of Texas used ECG screenings in addition to the check ups traditionally used and required by the State U.I.L. committee. Now about 25% of school districts in Texas are using the screenings due to foundations throughout the state.

Those wishing to have their heart checked by an ECG screening can register at the website www.codystephens foundation.org. A limited number can be performed in the time allotted so make your registrations soon.

This website is created to share Codys story with others and do anything and everything we can to raise awareness of this silent killer and help prevent other families from experiencing the loss and heartache that we know.

This is a free heart screening, however donations will be accepted the day of the event. Because funding can detect life threatening conditions.

As an example of the impact that the screening can have on seemingly healthy people, the University of Pittsburgh now screens their first time athletes with an ECG. This year their freshman class of athletes had two students discovered to need heart surgery.

This screening however is only the beginning of the outreach done by this foundation and its impact on the State and the nation is difficult to determine. 60 Minutes Sports recently did a televised report on Scott and Melodys efforts. Many leave the program asking Well, why doesnt every school screen first time athletes with ECGs?

In the last legislative session the House of Representatives Committee unanimously approved a measure to make screenings an addendum to the physicals now done. The Senate Committee however saw the measure stall. Now, Lieutenant Governor Dan Patrick, R., has expressed interest in the legislation.

Saturday, August 27, at 7:00 p.m. until about Midnight at the David H. McNerney American Legion Hall 658 in Crosby the annual fund-raiser is to be held. Tickets are available and tables are still for sale. Tickets are probably going to be available at the door this year. Live Auction items are still being collected. Details for buying tickets are available on the facebook site Cody Stephens Go Big or Go Home Foundation or the website or call Stephens at (713) 451-3600.

Previously, this event has been among the best charity events of the year. Leaders from throughout the country and northeast Harris County will be in attendance including the legislature and Harris County. Live auction items include a week stay at a condo in Puerto Vellarta. An axis hunt, sport memorabilia, concerts including Dolly Parton and many more are offered.

Speakers from throughout the country will share their stories and a young man from Deer Park whose heart surgery begins days before the event will share how his mothers insistence on an ECG due to Codys story may have saved his life.

Catfish on Wheels is catering the event. D.J. Dennis Butterworth will be playing the music. Bill Busby will be the auctioneer.

In the Deer Park case the doctor did not want to do an ECG even after he had heard a problem but the youths mother insisted. The results lead his to surgery. His best friend since the third grade had the surgery just days before he was to have the ECG. But the doctor was upset that the mother insisted.