HIGHLANDS  After 8 years of posting on the National Priorities List of Superfund sites, the EPA will finally announce the details of their Proposed Plan for dealing with the toxic wastes in the storage pits in the San Jacinto River.

Officials from the Dallas office of the EPA, or federal Environmental Protection Agency, will be on hand at a meeting on Thursday evening, Oct. 20 at 6:30 p.m. in the Highlands Community Center building.

The press announcement released last month stated that they had determined that all toxic waste, which is deadly diozins and furans, should be removed from the north and south impoundments which straddle the I-10 bridge over the San Jacinto River.

The Superfund Process is a slow and methodical step by step regulations that end up with a Record of Decision which will be announced by the EPA at the end of December. Theoretically this will end the study process, and allow negotiations and removal work to proceed.

However, We are now entering a 60 day public comment period, which will end on November 28. The public is urged to express their views on the problem and the proposed solution, at this meeting or directly to the EPA on their website or by email. Each comment will be answered, according to EPA, and entered into the public record. It is possible, but not likely, that the Proposed Plan could change after this process.

Jackie Young, the most vocal of the proponents that want the toxic wastes removed, has called for the public to attend this meeting, and then submit their comments or opinions supporting the complete removal. Young claims that opponents have been circulating false and misleading information regarding the clean-up process.

Young stated that I look forward to the EPA clearing up misinformation regarding the Pits and the ability for the clean-up to be safely executed.

The EPA said that Thursdays meeting is to inform residents of the proposed cleanup strategy and obtain comments on the Proposed Plan and EPAs preferred remedy.

If you are unable to attend, or do not submit comments at the meeting, you can still send your opinion to the EPA before November 28.

The Online address is:

The email address is:

A group of opponents to the clean-up, known as San Jacinto Citizens Against Pollution, with the website keepitcapped.com have just issued another position paper, from an environmental expert. Dr. Tim Barber, who works for the Environmental Resource Management firm, a private consulting company, has stated in a press release that perhaps the most significant issue associated with dredgings potential effectiveness is the extent of residual contamination following dreding. No dredging operation can remove every particle of contaminated sediment, and field results to date for completed environmental dredging projects suggest that post-dredging residual levels, expressed as contaminant concentration in surface sediments, have often been greater than the cleanup levels.

END_OF_DOCUMENT_TOKEN_TO_BE_REPLACED 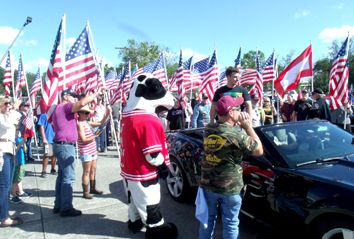