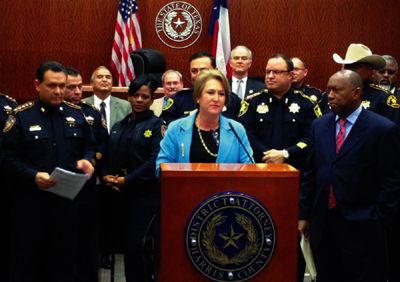 Harris County District Attorney Kim Ogg announced Thursday a new program to deal with cases of low amounts of marijuana that she described as part of a new era in the countys criminal justice system.

Under Texas law, having four ounces or less of marijuana is a misdemeanor.

Starting March 1st, people caught with that amount, or lower, will get a second chance before going to jail.

You will be offered a chance to sign an acknowledgement form promising to take a decision making class, a cognitive decision making class. Takes four hours and costs $150. Youll be required to do that within 90 days, Ogg explained during a press conference held at the Harris County Criminal Justice Center, located in downtown Houston.

One of the arguments Ogg made was the high cost of arrests and prosecutions for these types of cases.

The District Attorney estimated the county spends about $26 million per year on misdemeanor marijuana cases.

She also said the program is in accordance with Texas law because of the discretion prosecutors have.

Kevin Buckler, an associate professor of Criminal Justice at the University of Houston-Downtown, agrees with the District Attorneys reasoning.

Harris County Sheriff Ed Gonzalez praised the initiative and, on behalf of the City of Houston, Mayor Sylvester Turner and the Houston Police Department Chief Art Acevedo did the same.

Acevedo thinks it can help his department improve public safety.

What matters most to the people of Houston isnt somebody with a baggy of marijuana, what matters most to them is whats going on with burglaries of our residences, burglaries of our vehicles, armed robbery, sexual assaults. We are going to focus on being smart on crime, focused on crime, Acevedo commented at the end of the press conference referring to the possibility the program will help HPD use its resources more effectively.

However, some members of the regional law enforcement community have expressed their opposition to the initiative.

Brett Ligon, District Attorney for Montgomery County, criticized Oggs program and said in a news release that his county wouldnt implement a similar program to avoid becoming a sanctuary for dope smokers.