CONGRESSMAN CRENSHAW IN CROSBY: Solutions for terrorism that keep due process

CROSBY – Dan Crenshaw R. 2nd U.S. Congressional District was inside Crosby Church last Saturday, Sept. 7, for a town hall style meeting to answer questions about what he reportedly said about “red flag laws” and the T.A.P.S. act, a grant program to enable law enforcement to focus on probable threats rather than chase after silly exaggerations.

Having defined the TAPS act as a resource for law enforcement that does not change due process, he indicated that it is legislation he supports, he moved on to “red flag” laws.

CROSBY – Television Station ABC13 has a recurring news program feature about neighborhoods around the city of Houston. They are now working on a program about Crosby, which will feature well known landmarks, eateries, and people.

A group of citizens familiar with Crosby met a few weeks ago with the production staff of ABC13, to exchange ideas about what should be included in the show, which will air at the end of September on various news programs, and occur over several days.

It is expected that the program will feature landmark restaurants such as the Crawfish Shack, schools and churches, historical markers at Humphrey Jackson Cemetery, outstanding individuals and sports teams, key industries such as the turf farms, recreation on Lake Houston, history of Barrett Station and more. The program is meant to emphasize the best features of the community.

Suggestions on what to include in this presentation are welcome, and can be directed to Chris Nocera, producer, 713-218- 2870. 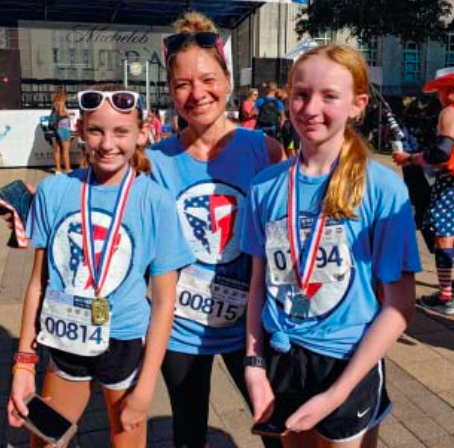 The Rankin ladies have participated for 4 years in the ideal race to honor fallen Army hero’s sacrifice, unite communities to strengthen America’s National Character, and to measure the health benefits of the participating members.

Although Reyna has medaled each year she participated, this year she came in First Place in her category.