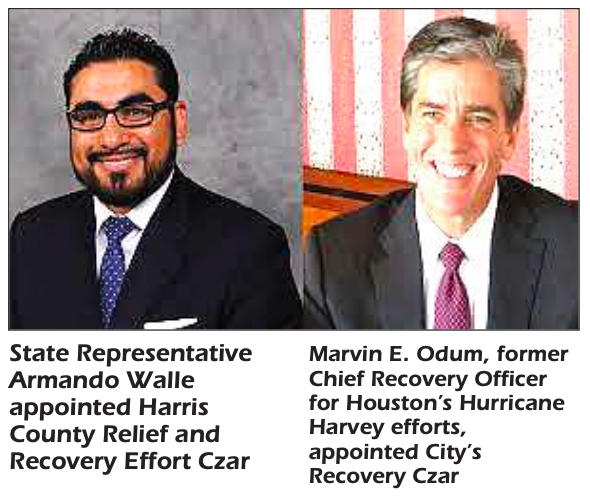 HARRIS COUNTY – April 20, 2020, County Judge Lina Hidalgo on Monday selected State Representative Armando Walle to lead the COVID19 pandemic relief and recovery effort on her behalf. As Harris County COVID-19 Relief and Recovery Czar, Rep. Walle is tasked with leading the effort to drive the region’s economic recovery. He will join the Houston relief and recovery Czar in this effort and jointly they will convene community and government stakeholders as necessary.

“State Rep. Walle is uniquely positioned to build consensus across Harris County’s diverse communities to help our region emerge from the COVID-19 disaster. As a leader in the state Legislature on issues of health, safety, and the economic well being of families, he’s a champion for the important priorities that we want to make sure are in the forefront of this relief and recovery effort,” Judge Hidalgo said. “Like the rest of the world, Harris County will not be the same when this crisis abates. But with inclusive, fast and coordinated planning, we will build an economy and a social services network that gives every resident the tools they need to thrive once again.”

END_OF_DOCUMENT_TOKEN_TO_BE_REPLACED

By Patrick Svitek, The Texas Tribune

During a news conference at the Texas Capitol, Abbott said Texans’ efforts to curb the spread of the coronavirus were paying off.

“We’re now beginning to see glimmers that the worst of COVID-19 may soon be behind us,” Abbott said. “We have demonstrated that we can corral the coronavirus.”

To get the economy going again, Abbott named a “statewide strike force” chaired by James Huffines, the Austin banker and former UT regent. The task force staff will be led by Mike Toomey, a veteran lobbyist who was chief of staff to Abbott’s predecessor, Rick Perry.

Abbott offered a host of names that will advise the task force, including fellow statewide officials, top medical experts and business leaders.

After naming the task force, Abbott said he was issuing an executive order loosening the restrictions he previously put in place on non-essential surgeries.

END_OF_DOCUMENT_TOKEN_TO_BE_REPLACED

Harris County Public Health is running both sites, which are temporary and only available for pre-approved residents. Officials said walk-ins will not be allowed.

Harris County Public Health will be testing 100 pre-approved residents a day at each location.

Commissioner R. Jack Cagle said each site is able to complete as many as 100 tests per day, but these numbers expected to increase daily.

END_OF_DOCUMENT_TOKEN_TO_BE_REPLACED

Where you can get tested for coronavirus in the Houston area

There are several free, drive-thru coronavirus test sites in the Greater Houston Area and some will test with or without symptoms.

END_OF_DOCUMENT_TOKEN_TO_BE_REPLACED

CROSBY – According to a letter from the Crosby Fair & Rodeo Board the entertainment and rodeo has been cancelled for this year but the livestock auction is still to be held.

According to Gene Hicks a board member, the Cook-Off is still to be held and the performing act “Bag Of Donuts” from New Orleans is still to play for one of the two nights. Of course, this too is subject to change based on developments of the COVID 19 struggle and governmental regulation.