CROSBY-HIGHLANDS – Crosby schools are scheduled to begin opening August 13 with virtual learning, and face-to-face classes on September 8 with an option for virtual or in-person classes. Goose Creek schools will start September 8 with three weeks of virtual classes.

Both virtual and face to face classes will happen in these districts, with face-to-face enrollment dictating the number of classes. Interactions in virtual learning will be real-time, pre-recorded and posted assignments in “Schoolology,” a software program for handling such classes.

About 6 to 8% of Crosby students do not have access to on-line or virtual learning according to a surveys taken by the school. Another survey was due in back to Crosby ISD on Tuesday. Some school board members including Tanya Eagleton have advocated legislation to fund instructional virtual access for all students.

END_OF_DOCUMENT_TOKEN_TO_BE_REPLACED

This past week, the town of Barrett Station, Texas continued without fail, celebrating its 34th annual homecoming. This has been a homecoming celebration like none other. If for no other reason, the pandemic environment in which the celebration has taken place. The Barrett Station Community Development Organization, host of this year’s homecoming chose to hold all of the weekly homecoming activities, virtually. And, the virtual activities presented to its residents in the form of Zoom Events on social media (at the AllAboutBarrettStation Facebook page and via Zoom, together), have proven quite successful, with a high rate of viewer participation (reference attached flyer for list of Zoom Events.)

The celebration ended with an actual parade, last Saturday — from Gulf Pump Road @ FM 2100 and proceeding south – and ending up at Riley Chambers Park. The procession began at 11:00 a.m. For safety reasons, the Riley Chambers Park was closed to prevent gathering due to COVID-19. In accordance with safety measures as handed down by local government, all parade participants were strongly encouraged to: practice social distancing, wear masks and wash their hands. This year’s homecoming theme was “One Community, One Voice.”

END_OF_DOCUMENT_TOKEN_TO_BE_REPLACED

HIGHLANDS – Due to the continuing pandemic, and restrictions on size of meetings, the monthly meetings of the San Jacinto River Coalition continue to be virtual, over the internet.

Last Tuesday, THEA director Jackie Young Medcalf brought the group up-to-date with a review of the status of several Superfund sites, including the waste pits in the river. Jackie discussed the state cancer registry, and the discovery of cancer clusters throughout the area. Clusters are areas of elevated numbers of cases above the average. Clusters have been noted by the state health department in the Highlands, Channelview areas, and the fifth ward area of Houston.

No causal affect has been determined in these cases, but environmental pollution is an obvious contributor. In the fifth ward, for instance, an old creosote factory used to treat wood railroad ties is thought to be the source.

Jackie is waiting to review the 30% remedial design report for the waste pits in the river, she said. This is due to be released soon, and will reveal the plan for remediation. (As of this writing, it has actually been released by the EPA, but with thousands of pages, a review has not been accomplished.) The report will reveal what types of “treatability” will be available.

Jackie reported on types of waste, and how they are classified. She takes issue with the early report that the toxic material is only Class I, Non-hazardous Industrial Waste, which allows lower standards of remediation.

She discussed the types of cancers, for both children and adults, that have been discovered in the TDHSD surveys.

END_OF_DOCUMENT_TOKEN_TO_BE_REPLACED 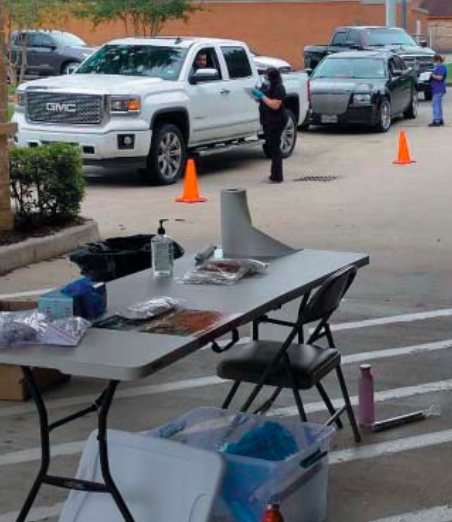 Free COVID drive-through testing at Crosby Community Center Monday, July 20 through Friday, July 24 from 8 am to 4 pm. Pre-registration is required but can be done at the test site. Participants will hear via telephone within 24 hours to verify information and results should be received within 48 to 72 hours. Plans are working to make the center a permanent site for testing but has not been achieved yet. For more information, visit www.coronavirus.gov.