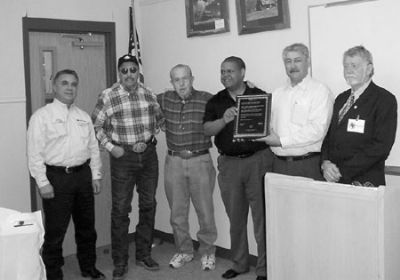 CHAMBERS COUNTYThe Chambers County Historical Commission held its first meeting for 2007 on Jan. 27 in the County Library in Anahuac.
The Commission made a formal presentation of a Resolution and wall plaque to the employees of Shell Pipeline for services they had rendered in repairing the State Historical Marker on the Dr. Edward G. Hartman Cemetery located in West Chambers County.

Shell Pipeline employees attending the presentation were Gerald Carabajal, Maintenance Supervisor for the Houston District; E.B. Flores, Maintenance Leader; Phillip Barker, Public Awareness Representative and Rudy Isaac, Right-of-way Technician.
The marker had been damaged during a construction project and Shell Pipeline employees repaired it in the maintenance shop and reinstalled it in the cemetery. The cemetery is located on the property of Harry Daves, longtime Commission member and he offered special recognition to the Shell Pipeline delegation.
A major item for action was the election of officers for the year. Bob Wheat was elected Chair, R.B. Scherer was elected Vice-Chair, Kay Willcox was elected Secretary and Andrea McClelland was elected Treasurer. Each of the officers elected had held the same office in 2006.
In other business, the Commission discussed the upcoming celebration in Fort Anahuac Park to recognize the 175th Anniversary of the Battle of Anahuac. The event will be held on June 9 and will consist of numerous activities.
Several committees have been established and anyone wanting to assist with the activities is urged to contact Bob Wheat at 409-267-6599.
The Commission Committee Chairs reported on their activities since the last Commission Meeting. It was noted that the Christmas toy drive conducted in the Thomas Jefferson Chambers Home was very successful and that the toys had been distributed with assistance from the Child Protective Services.
Chair Wheat reported that the purchase of a building to house the County Historical Archives has been completed and will be available for occupation in February.
The building was purchased by Chambers County and is located across Washington Avenue from the Chambers Home and the Dr. Schilling Office building. It will house the Countys historical records and serve as the meeting location for the Historical Commission. Future plans also call for the installation of a County Historical Museum.
The Historical Commission meets on the fourth Saturday of each month at 9 a.m. Anyone wishing to join the Commission is urged to contact Chair Wheat. Commission members are appointed annually by the Chambers County Commissioners Court.