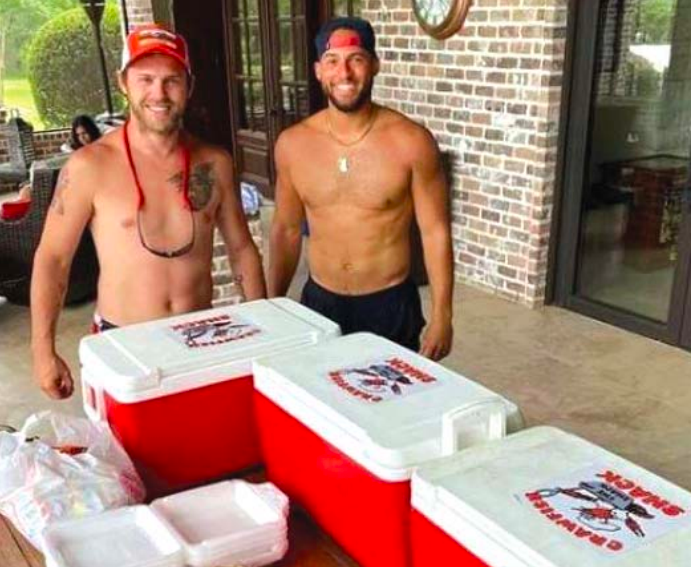 Popular Astros baseball players Josh Reddick, and George Springer, got their Memorial Day crawfish dinners from Crosby’s number one rated Crawfish Shack. Owners Dan and Jen Meaux welcomed them as they delivered several coolers of crawfish and “the fixins.” Crosby’s Crawfish Shack reputation for great food has become well known around Houston. Reddick was quoted “Thanks to the Crawfish Shack for catering our Memorial Day get-together. Everything was cooked to perfection and it was delicious.” (Photo courtesy of Josh Reddick)

North Shore’s favorite son, and retired Judge, was honored in January at the Texas USSSA Hall of Fame Banquet and Induction Ceremonies held at the Dallas Marriott South Hotel.

Mike Parrott was recognized as being in the Top 100 Greatest Softball players nationally by the USSSA softball association. His career in adult amateur softball competition spans from 1975 to 1983, and then two returns from retirement in 1987 and 1990.

Parrott’s awards are many, including in 1980 leading the nation in home runs, with 323. In his career he garnered 61 awards for his home run prowess and in tournament play.

END_OF_DOCUMENT_TOKEN_TO_BE_REPLACED

The Crosby Cougars and the Hargrave Falcons convincingly advanced in the Bi-District playoffs last week as they routed their opponents by over 28 points.

Crosby defeated Willowridge by 70 to 42 with the homefield advantage last Friday. It was a record high score for the Cougars.

Huffman bested Furr Brahmans 49-6 last Thursday with he home field advantage before the half time. The blow out before the half allowed the coaches to keep the second half time clock turning like after the two minute warning. The Falcons have won eleven games straight.

END_OF_DOCUMENT_TOKEN_TO_BE_REPLACED

Both Crosby and Huffman have succeeded it to be in the play-offs this year.

The Huffman Falcons had a banner year in 11- 4A as Champions with their 10-0 regular season and 5-0 in district. Their undefeated stature is the first time in that division. The falcons will play Furr Brahman on Thursday, November 14 at 7:00 p.m. at Falcon Stadium. Brahman is 5-5 in regular season but number three seed in their division.

Crosby will play at home this week against Fort Bend Willowridge of 11-5A. The game starts at 7:30 on Friday in Cougar Stadium formerly known as the Jungle.

Crosby is 5-2 in District and tied for second place. Fort Bend Willowridge is 6- 3 in regular season.

Crosby comes into the play-offs after a sound feasting on the Baytown Lee Ganders of 59-14. The Cougars recently were reranked in the State as 39 and 393 in the nation. Just in time, they are building momentum.

The US 90 Rivalry has another game in the books and this time it is an overwhelming victory for the Cougars as they blank the Dayton Broncos 44-0.

Early action demonstrated the game. The Cougars sacked the Bronco’s Quarterback on the first play and then recovered a fumble on the 3 yard line. Deniquez Dunn proved in this game he can pass, catch and scramble. In the first quarter the Cougars were up 13 to 0.

In the second quarter the Cougars would score two touchdowns and field goal. END_OF_DOCUMENT_TOKEN_TO_BE_REPLACED

CROSBY – Blane and Carol Hearn raised a son who played baseball since he was four years old.

The couple sat with this reporter at Blane’s shop, where he was reconditioning a truck from the 1940s and making a fantastic queen sized bed from vintage truck parts, complete with lights and radio. He showed me what he was making for his customer as I made my way through a menagerie of artisan life-like, taxidermic crafted deer heads.

“I was concerned to see if he wanted to keep living baseball after college.” said Blane. “Hunter answered, ‘I can do this, dad.’ So, I knew he would get after it.”

Hunter signed with Philadelphia Phillies in the 26th round of the Major League Baseball draft on June 5. That means he gets to try professional baseball and is in Florida training currently. The training isn’t a walk in the park; it is the same workout as U.S. Navy Seals endure for fitness training. The details of what his freshman year in the big leagues will be are still open, although he has a great history as a catcher. The minor’s papers only say “outfield.” We are told that is just generic.

Hunter is a graduate of Crosby High School and Sam Houston State University with a degree in Construction Science and Management with a minor in General Business Administration. Hunter continues to hold baseball records at both his former schools. END_OF_DOCUMENT_TOKEN_TO_BE_REPLACED Congratulations to Hargrave High School Varsity Softball team. State 4A Champs! Katy Janes pitched two shutouts, winning 4-0 vs. Fredricksburg and 11-0 vs. Anna. Janes was also the MVP. This is the second state championship for Hargrave in the last five years.

Ball season begins with crack of the bat Last Saturday, a parade down Main St. and thronged ball parks signaled the beginning of baseball and softball season in Crosby and Highlands. END_OF_DOCUMENT_TOKEN_TO_BE_REPLACED

Crosby A.D. quits in March for other offer

CROSBY – It is no secret that the financial condition of Crosby ISD has cost the district some fine people and most knew that would happen when the laying off of over 100 teachers was announced.

The district had to layoff a bunch of coaches and cut the budget for athletics by 60% in 2018.

Riordan was known to have been upset in October of last year when it was announced that Michelle Trotter, later chosen to be Coach of the Year, was to be laid off in spite of her diligence with the Lady Cougar’s Basketball Team. She had been Social Studies Curriculum Coordinator and her last day was going to be Dec. 20. That was prior to the intercession of local parents.

Coach Jeff Riordan, Athletic Director and Head Coach of Crosby Football has indicated he will be leaving after Spring Break but that is unofficial and all await approval of the school board. He has indicated an offer came for an opportunity to return closer to where his extended family lives.

END_OF_DOCUMENT_TOKEN_TO_BE_REPLACED