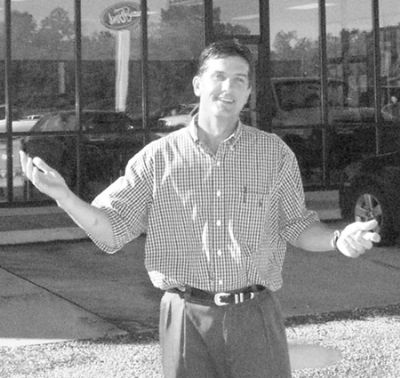 LIBERTYWhen the runners line up at the starting gate to the 2008 Boston Marathon one of Libertys own will be among the numbers.
Robert Dunn qualified for the Boston event by scoring a time of 3:16.45 at the ATT Austin Marathon on Feb. 18. Dunn said that he has always wanted to run in Boston but to get there you have to make the cut in one of a series of sanctioned events. To make Boston in his age group he had to finish in less than three hours, 20 minutes.
The Boston Marathon is the biggest in the country, maybe the world, Dunn said. Its famous and I really wanted to be part of it.
The Boston Marathon takes place each April, but do not look for Dunn this year.
The qualifying time is good for two years, he said. But there isnt enough time for me to make reservations and prepare for this year so I will continue to train and run in 2008.

Dunn, who can be found at the B.J. Ford dealership in Liberty during the week, said that his dad got him interested in running as well as some friends who are also distance runners.
The training helps me stay in shape all year round, he added. When he first got into running Dunn said that he started small with three-mile courses. He then moved up to 10K runs, which are 6.2 miles. The 10Ks really helped me learn how to set my pace.
Pace, Dunn set, is important when running long distances. At the Austin event there were a group of volunteers called pace groups. Each group carried a sign with a specific finishing time as they travel the course. If a runner keeps up with a specific pace group he can closely estimate his finish time. Knowing he needed the 3:20 mark, Dunn said that he kept pace with the 3:15 group, which allowed him to average 7 minutes 31 seconds per mile.
Despite qualifying this year, Dunn is no novice to marathons. He has completed 22 marathons including ones in Houston, Dallas and San Antonio but this is his first time at the big one.
Another advantage to waiting until next year (2008) is that I can have a lot of family and friends there to cheer me on.
Legend says that the marathon dates back to 490 B.C. when the Persian Empire invaded Greece. Following a battle at Marathon in which a small Greek force defeated a larger Persian force a messenger carried the victory message on foot to Athens. Depending on which account is believed, the distance was between 21.4 and 25.3 miles.
In the first Olympics in 1896, the run was commemorated by a new competition. In 1908, the British Royal Family changed the distance to 26.2 miles so that they could see the runners from the balcony of the royal palace.