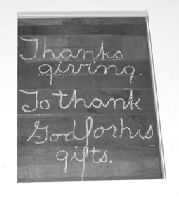 By BOBBY HORN JR.
DAYTONIt was six years in the making, but this past weekend the Old School Museum opened its doors to the public.
A ribbon cutting ceremony was held for the museum located in a former schoolhouse across for the Dayton Post Office.
Dayton Historical Society President Mary Beth Jamison said the society began looking at the building in 2001. While it was build as Daytons first school, he building had gone through changes since it was used from 1900-1910. During the mid to late 1990s the building housed an antique store. This closed in 2000 and the building was condemned.
The owner of the property, Margaret Jameson, agreed to sell the land and building to the society for $23,000.
Mary Beth said that as a historical landmark itself, the building was a perfect location for a historical museum. Even though work has been done inside the building to accommodate modern conveniences such as electric lights, climate control and an alarm system as well as bring it up to code, much of the interior is as it was when students used the building.

These are the original floors, ceiling and walls, Mary Beth said.
The museum is divided into sections with a community room, a schoolroom and a Dayton history room. In the schoolroom, school furniture of the period has been set up to give visitors a glimpse into life in yesteryear. On the desk sits a copy of the McGuffey Reader, a typical schoolbook of the period. In other rooms are photographs and paintings of Dayton past, including a painting of the Rio Theatre that operated in downtown Dayton in 1970.
Putting the museum together was not cheap either. Mary Beth said that they raised $100,000 to renovate and outfit the museum.
Funding came for a diverse selection of sources. In addition to private donations, the museum committee held quilt raffles, radio and TV auctions, garage sales, bake and plant sales.
We tried to think of any way to bring money in, Mary Beth said. At one point, the television show Texas Justice invited several Dayton residents to be in their audience. The monies paid by the show were donated to the museum coffers. The museum also received funds from the City of Dayton from the Hotel/ Motel tax. These funds can only be used for certain types of projects including tourism, which allowed the museum to qualify.
This has been a labor of love, Mary Beth said. Not just for me but all of us, referring to the many volunteers who helped make the museum a reality.
The museum will be open two hours a day on Saturday and Sunday as part of the Dayton Ole Tyme Days Festival, then another two hours during Pioneer Days which is held the first weekend of May,
Future plans are to open the museum for regular operating hours three days a week.