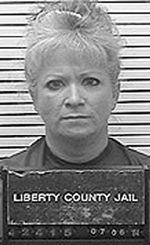 LIBERTYA former Liberty County employee charged with stealing thousands of dollars from the County Clerks office has pled guilty to felony theft.
Cheryl Ann Holstein entered a plea of guilty on July 2 in the 253rd District Court in Liberty.
Judge Chap Cain III sentenced Holstein to five years deferred adjudication and 300 hours of community service, was fined $1,000 and was ordered to pay $1,500 in court-appointed attorneys fees and $318 in court costs. She must also pay back the county restitution and interest amounting to $19,348.
Mike Little, Liberty County District Attorney, said that $17,000 of that must be paid by Oct. 2, or face revocation of probation.
Liberty County Sheriffs Office Sgt. Chip Fairchild said that case first came to light in September 2003 when County Clerk Delia Sellers discovered approximately $12,000 missing as she was conducting a routine check of daily transactions.
Sellers alerted the sheriffs office, which began an investigation.
During the course of the investigation investigators learned that the funds taken from the office during the first three months of 2003, Fairchild said. The investigation also led authorities to Holstein, who had worked in the office from August 2002 through March 2003.
In July 2006 a Liberty County Grand Jury indicted Holstein and a warrant was issued for her arrest. Holstein turned herself into authorities and was later release on a $5,000 bond.