No relief from river flooding 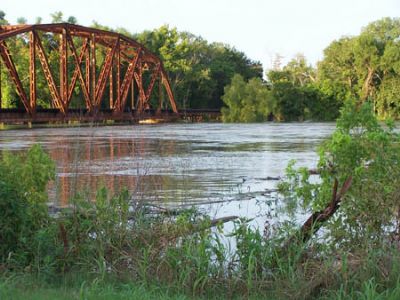 By BOBBY HORN JR.
LIBERTY COUNTY Flood warnings continue across the county as officials watch the Trinity River continue to rise.
Last week Liberty County Judge Phil Fitzgerald asked for voluntary evacuations.
Due to the heavy widespread rainfall received in Central and Southeast Texas, the Lake Livingston Dam is releasing levels that has put the Trinity River at flood stage, Emergency Management Coordinator Ken DeFoor said.
On Sunday, the river at the Highway 90 Bridge was recorded at 27.9 feet. The level is expected to reach 29 feet by Friday. Flood stage for the river at this point is 26 feet. At 29 feet residents can expect major lowland flooding to begin at homes in the subdivisions above Liberty.
The Trinity River hit the 15-foot flood stage at Moss Bluff on Monday. By Friday the river is expected to be at 17 feet.
The Champion Lake Public Use Area on the Trinity River, which is located at the end of CR 417 off F.M. 1409, is closed due to flooding. The pier, coat ramp and parking lot are all underwater. The Champion Lake access will be closed until the water drops below the pier level.
Motorists should use extreme caution when attempting to cross any flooded roadway(s). Night travel should be avoided, DeFoor said. He added that livestock and equipment should be moved out of the flood plain.
Officials at Lake Livingston said they have seen some drop in the water level at the north end of the lake but that any change to the discharge rate at the dam would be marginal. Rain forecast for early next week could affect this, however.
For those displaced by the floods, a shelter has been set up at the North Main Baptist Church in Liberty. Bring your medication, personal items, snacks, blankets, pillows, etc. No pets will be allowed. For more information about the shelter call 936-334-3219.