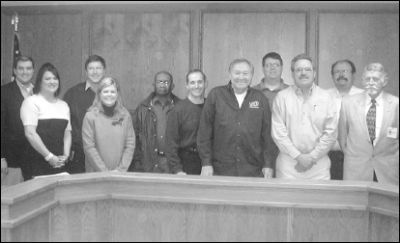 By PUDGE WILLCOX
CHAMBERS COUNTY– The Chambers County Mayors Coalition welcomed a group of history buffs to their meeting last week at the Cove City Hall.
Addressing the Mayors was Bob Wheat, Chair of the Chambers County Historical Society; Kevin Ladd, Director of the Wallisville Heritage Park; and Heather Hawthorn and Sarah Cerone, representing the Chambers County Sesquicentennial Committee.
Wheat gave a brief history of Chambers County from some 2000 years ago to the present. He invited the Coalition to visit and utilize the Countys Historical Museum and Archive Building for a future meeting.
Ladd spoke of the activities of the Wallisville Heritage Park which is privately funded and houses a museum and a genealogy library. He likewise invited the Coalition to utilize the Parks meeting facilities which include a one room school building located adjacent to the museum.
Hawthorn and Cerone reported on the upcoming events that are scheduled for the 150th birthday of Chambers County. The kick-off event will take place on the East Courthouse Steps on Feb. 11 at 11 a.m. and will include a hot dog lunch served near the Courthouse. Next, a Birthday Bash will be held on March 29 at Fort Anahuac Park starting at 10 a.m. It will be an all day family affair with activities for all ages. It will conclude with a gigantic fireworks display at 10 p.m. and a street dance until midnight.
Ryan Larue, District Coordinator for Senator Tommy Williams, spoke briefly about recent legislative activity and advised the Coalition that should they need legislative action during the next session in 2009, to contact the Senators Office for assistance.
The Coalition also reappointed Rita Standridge to the Board of Directors of the Gulf Coast Waste Disposal Authority. Mrs. Standridge currently serves as the Vice Chair of the Board.