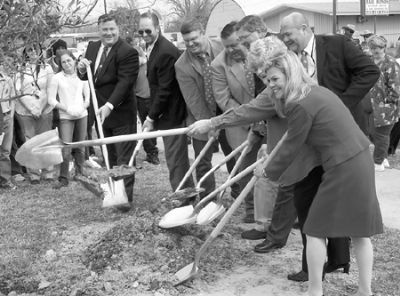 BY BOBBY HORN JR.
CHAMBERS COUNTYOne hundred and fifty years ago the 7th Texas Legislature carved a section from Liberty and Jefferson Counties and called it Chambers County, in honor of Thomas Jefferson Chambers.
On Monday citizens came together on the courthouse steps in Anahuac to kick off a year-long Sesquicentennial celebration.
County Clerk and Sesquicentennial Co-Chair Heather Hawthorne said that the committee actually began meeting last June to plan activities which included Mondays Kick Off, a March Birthday Celebration and Fall Trail Ride.
The Kick Off began with an invocation by Old River Baptist Churchs Danny Biddy. The Chambers County Sheriffs Departments Color Guard posted the colors while a combined orchestra of the Anahuac, Barbers Hill and East Chambers High School Bands performed the National Anthem. Kelsey Gifford, president of the Barbers Hill FFA Chapter led the crowd that numbered in the hundreds in the Pledge of Allegiance.
County Judge Jimmy Sylvia recounted how the county, in 1958, celebrated its 10th birthday. He compared Chambers County then with Chambers County now. Looking at old Commissioners Court agendas, he said that the county was dealing with the same issues now that it did then. He noted that prices of typical items did go up and I was three years old and had hair at the time.

Hawthorn also presented Proclamations from the Governors Office and the State Senate recognizing the countys birthday. State Senator Tommy Williams brought a Texas Flag that had flown over the Capital in honor of the county. State Rep. Craig Eiland said that he wanted to fly a flag in honor of the county but that Williams office had a larger staff and beat him to the punch. He also planned to present a Proclamation from the State House of Representatives, but said that Federal Express failed to deliver it on time to his office.
During the ceremony Bob Wheat, chairman of the Chambers County Historical Commission, presented a history of Chambers County, starting with its geological birth 30,000 years ago. He then spoke of the Native Americans who settled in the area prior to the Mexican colonists. It was at Fort Anahuac, he said, that the first shots of the Texas Revolution were fired. Chambers County also played roles in the Civil War and Oil Booms of the early 20th Century.
To celebrate the occasion students at Anahuac Middle, Barbers Hill Middle and East Chambers Junior High competed in an essay contest entitled Why am proud to be from Chambers County. The three winning essayists Pasha Hillyard, from Anahuac; Rhett Wilson, from Barbers Hill and Alexandria Extjct, each read their essays.
Audrey Chambliss, from the ESA Sorority, said that over the year a time capsule will be filled with items marking the 2008 and the celebration. The time capsule will be housed in a case built by the Barbers Hill FFA. It will be kept in a fireproof safe in the county museum until 2058 when it will be reopened for the Bicentennial.
The Kick Off closed with the dedication of Live Oak tree donation by Williams on the courthouse grounds to mark the occasion.