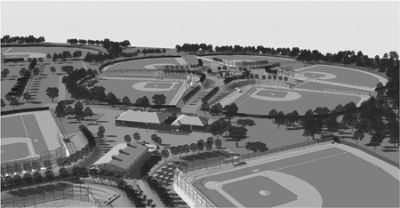 By BOBBY HORN JR.
MONT BELVIEULast week the Mont Belvieu City Council approved the Final Master Plan for a 70-acre $11M multi-function park to be built on Eagle Drive.
City Manager Bryan Easum said that they hope to have a final design in place within 120 days with construction completed by the end of the year.
The park, he said, will feature nine baseball/ softball fields, an amphitheater, skate park, splash pad, four playgrounds and amenity ponds. The park will include two large pavilions, two small pavilions and a service building for city Parks and Recreation equipment. There are also plans for 450 parking spaces.
When the city first decided to build a park they selected a 79-acre tract across from the Thrift-Tee Food Center. Easum said that the city sectioned off nine acres of that land which they are selling for commercial development. He said that the city would like to see parcel include a strip center that would hold family-friendly businesses. A walkway will be installed that will connect the park to the center. The parcel features 800 of frontage to Eagle Drive and is 900 deep. The land, which is zoned for Mixed Village Use is currently listed with realty firm Grub & Ellis for $2.5 million.
The full plan, Easum said, would cost the city between $10 and $11 million. Currently the city had between $8 and $9 million available to spend. If the cost goes over the estimate, he added, they city would then break up the project into two phases.
Despite the cost for the park, property owners will not see an increase in taxes. Funding for the project will come from two sources. The first source is capital project funds and the other is retired debt. This year marks the 10th anniversary of Eagle Point. The anniversary is significant is that the city will retire $5.5 million in debt. Since the debt has already been issued, Easum said, the city would be able to roll it into another project without increasing the tax burden.