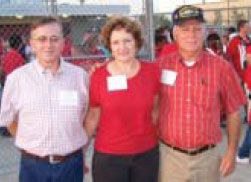 CROSBY  All the excitement over the general election this coming November 4 will be locally highlighted by the Crosby I.S.D. School Board of Trustees election as two positions are challenged and a former President is running unopposed.

Five positions came up for election this time and three candidates registered. Gerald Blankenship, a former submariner, now President of the local American Legion Post, will stand unopposed for Position 7, to be vacated by Earl Boykin. His name will not appear on the ballot as Harris County says it would cost more to enter his name.

Blankenship indicates he wants to balance the school budget in a couple of years but acknowledges that this will be difficult as the state is currently requiring No Child Left Behind but not funding it.

Locke states that his primary appeal for local voters is that he is not tied to any local entities.

These three all agree that school programs are being slashed due to budget constraints. They believe there are ways to cut budgets that will not jeopardies childrens education. They state they are for fiscal responsibility of tax dollars. They summarize their intentions as ACT (Accountability, Change and Transparency for the districts future.

Related to accountability, they intend to create a high quality, effective learning environment. They hope to ensure accountability while improving the level of cooperation between the board, teachers, the community, the state and federal government. The first thing we need to do is get out from under that 40 year old federal desegregation mandate, says Blankenship.

In their quest for accountability they intend to report to the community on a consistent basis students learning progress, how funds are spent and the overall fiscal health of the district.

To bring about change, they agree to balance the decision making process by allowing open dialog between the school board, teachers and the other aspects of the community with the understanding that best decisions are made through community involvement. They intend to focus on the importance of academics and be advocates for students, parents and teachers.

Their plan for transparency involves supporting an open and transparent decision making process including informed research, analysis, public input and reasoned discussions. They intend to implement the most participatory and transparent budget-setting process to determine school board spending policies.

These seem lofty goals considering the state of public schools today. In countless articles throughout the state, increasing costs of operations and capital projects would seem to make balanced budgets an impossibility. Meanwhile state representatives are saying schools have all the money they ever need.