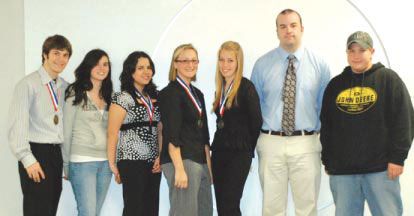 The Crosby Debate Team has triumphed in District Championships 15 straight times, according to Jason Courville, the Debate Coach of the last six years.

Matthew Malek, a Senior, and Megan Sanchez, a Sophomore, have won three tournaments this year including their victory two weeks ago. Malek with Nick Jennings made it to the State Finals last year, losing out to Bay City by a single judges ballot.

Crosby sent two teams to the District Cross Examination Debate (Policy Debate) where Dayton and Barbers Hill sent three teams each. The topic this year is The U.S. Federal Government should substantially increase alternative energy incentives with the United States.

This year and Malek and Sanchez won October 24-25 at Bellaire High School. On October 31 through Nov. 1 they triumphed at Westside High. At Clear Creek on January 31 they again won. Malek went to Dartmouth Debate Camp in Maryland last Summer and Sanchez traveled to Michigan State for a debate camp.

What makes a successful debate coach? When Courville is challenged to defend his course he seems ever ready to win an argument, Arguments have conclusions, claims and they have warrants  reasons to support the claims and data to support the reasons. If you have a well constructed argument, you also need to have counter arguments and comparisons between the two so. Debate has statistically, proven to increase scores on standardized tests, increase performance on essay parts of tests, and virtually eliminates a drop out rate. It engages those that are not previously focused at school. Its hard to explain how it changes your personality, delivery and outlook and on how you assess things and how much quicker your processing time is on the back and forth of presentation. I cannot express how transformative it is to participate.

When asked what drives a debate coach to spend long hours and extra time on weekends to make winning teams, the easy answer is that he hates to lose but the in-depth answer is much closer to an academic ideal, I dont reject things out of hand before I really look into them. I have become less trusting of easy ideological answers and I think as I continue to probe deeper it provides stimulus to my students.