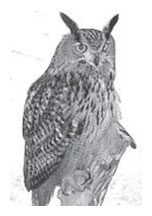 Sometimes my ole cuz up Montana way sends items of interest about that part of the world. The latest was a newspaper article out of the BILLINGS GAZETTE regarding the use of birds of prey to rid starlings from one of the refineries.

As an admirer of birds, this article struck my fancy.

A refinery in Billings hired a company out of California which uses trained owls, hawks and falcons to rid the massive number of starlings.

Dont go getting all huffy about that as the company does not want to hurt the birds, but simply gives them a fright to go someplace else.

They let the birds of prey out in the afternoon and evening to scare away the unwanted birds.

The article had some interesting facts that you may be interested in:

A hawks eyesight is eight times better than a humans, allowing it to see a rabbit up a mile away.

A European eagle owl can see a hundred times more better than a person and is able to spot a mouse by starlight a football field away… yes more better.

An owls hearing is so good; it can detect a rat 2 feet under the snow or grass.

They say the birds will stay away until they go back south in the fall.

Sort of like me this past weekend with the Mrs. and grandyoungan looking at a potential fishing hole.

We went up to Liberty County to the Trinity River Wildlife Refuge to check out a fishing spot. The spot off the pier was so-so. I walked down the trail to another pond on the other side and down a bit while the girls went exploring the butterfly trail.

On down a ways this one little pond looked just right and down there I went. Water on both sides and possibly some fish in the one on the left. Eye balling the water and banks I gandered upon a rather large gator as it was eyeing balling me big time.

Like those birds leaving the refinery, you can have this place!