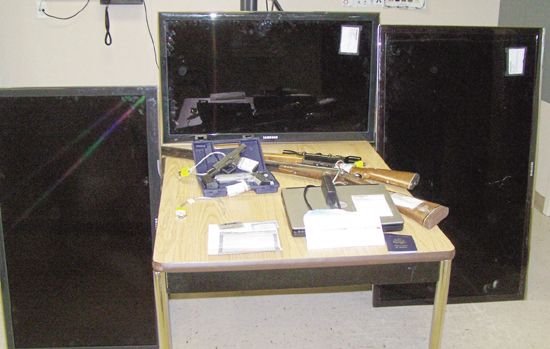 By LEWIS SPEARMAN
HUFFMAN TO HIGHLANDS Law enforcement and the local public are combining to add names and groups to the number of suspects for burglary and copper thefts in the last few weeks.
The efforts have put names and methods to such notable thefts as local charities including the Crosby Fair & Rodeo copper thefts, also the publics zeal to watch one anothers home has added a lot of wild goose chases over the last week.
The efforts of Precinct 3 Constable Deputies to get suspects to talk have been productive beyond the officers dreams of late.

What began as a run down of two separate rings one in Huffman and the other between Highlands and Crosby has branched into a confusing set of different suspects working licks [a burglars term for a burglary] of varied nature with different partners.
The story is no longer about just residential burglary now there are charges of burglary of commercial businesses, a lot of copper thefts from charities and some over 1,000 pounds at a time and auto theft. said Deputy Shane Cates.
Lieutenant Terry Ganey and Deputy Cates are tasked with the difficult duties of not only patrolling the areas but also sorting out the statements made by suspects when they are being questioned.
Lately, there is more information coming out than expected. At one time deputies were attempting to track thefts and burglaries and began to notice that more and more of the crimes were being committed.
Once a burglar had been caught from an item recovered at a pawn shop, the number of arrests began to mount and the charges began to get more diversified including auto theft, burglars caught in the act etc.
As voluntary statements were taken the amount of criminal activities and probably perpetrators multiplied for officers. While charges have been filed, the District Attorney has asked that names not be released yet.
Other sources indicate that there had been shots fired at people from previous articles.
The copper thefts have not only been the noted charities, that working people pull out their last nickel with which to donate to build something good, but also businesses up and down FM 2100.
They were hitting underground trunk lines to steal copper. We have located a bunch of jewelry that was being sold at a store and stolen, we are in the process of getting that back. We dont know if we can get it all. said Cates.
It is possible that the group working between Highlands and Crosby has connections to larger organizations. This three man ring according to statements hit all the entities damaged on the Crosby Fairgrounds.
Statements have been made by suspects of the group plotting what they were going to do and then executing with back-up plans when the business owners worked late. Actors in these crime at one scene had made sure to defeat all surveillance cameras except for one on the roof that they were not aware of being located there. Actors were noted to make statements about staking out victims from the inside of the location.