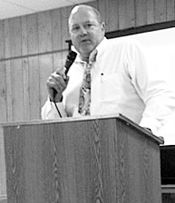 Dozens gathered at the Cove Community Building Monday night to hear from area civic leaders on how the redistricting of voting zones would affect them.
The meeting was the last of three held on Monday, with two more being held in Anahuac and Winnie, so that constituents would have the opportunity to ask questions and become better acquainted with the process. Approximately 40 attended the Anahuac meeting, and around 20 did the same in Winnie.
Chambers County Judge Jimmy Sylvia opened the meeting, and was followed by Robert Bass of Allison, Bass and Associates, an Austin law firm hired by the county to make sure the process was completed legally.
Bass explained that the redistricting process dates back to 1789 and is mandated by the Constitution, to ensure that all voting areas are represented fairly and in proportion to all others.

Bass further explained that the Department of Justice has to pre-clear any redistricting plans as stated in the Voting Rights Act of 1964, which was designed to address discrimination in the voting process that at one time excluded minorities.
The current plans on the table were based around information provided by the 2010 Census. The numbers show that of those who responded to the Census, 7,099 live in Precinct 1, 5,952 in Precinct 2, 10,919 in Precinct 3 and 11,126 in Precinct 4, numbers that show discrepancies in representation. The data also indicates that there has been some shifting in ethnic population. While Caucasian and African-American totals have declined somewhat, the Hispanic population has increased.
Bass added that sampling of data can be used to make up for those who did not respond to the Census, which makes the numbers somewhat inexact. “Is it spot-on accurate? No,” said Bass. “But it’s the only measurement we have that the courts accept.
“I’ve come to appreciate how difficult it can be to measure these things.”
Several elected officials stood to give support to one proposed redistricting measure — Plan 4, which keeps most of Precinct 2 wrapped around Trinity Bay. “Given the information presented here today, I’m leaning toward Plan 4,” Said Precinct 4 Commissioner Rusty Senac. “I think there’s a lot of issues on the shoreline that keep those communities together.”
Precinct 1 Commissioner Mark Huddleston agreed. “We’re here to serve the people. I’m losing neighbors in Anahuac to the redistricting plan  but I lean toward Plan 4,” Huddleston said.
District Clerk Patty Henry was also in support of this plan. “I can say that I live in Anahuac, but not within the city,” Henry said. “With Proposition 4 I will be in a different precinct, but it doesn’t really matter to me if I have to go a little extra.
“I like Prop 4 because it seems to be better for the entire county.”
Precinct 3 Commissioner Gary Nelson shared a sentiment that all the other commissioners agreed with. “I won’t hesitate to take calls from anyone,” Nelson said, “even if they’re not in my district. The Census tells us to change every ten years; it’s not because we want to change.”
County Clerk Heather Hawthorne expressed that county officials were intent on keeping things as close to what the citizens were used to as possible. “We’re going to try to keep election boxes where they are,” Hawthorne said. “People may have to drive a little further, but we’re going to try.”
Whatever plan is decided upon will go to the Department of Justice for review.