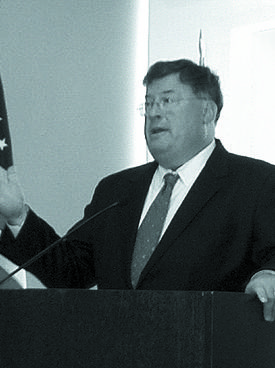 The West Chambers County Chamber of Commerce heard from State Senator Tommy Williams at their Sept. 13 meeting, and Williams did not mince words; things arent as bad as they could be, but numerous issues  including border security  are not as resolved as they should be either.

Barbers Hill Independent School District superintendent Dr. Greg Poole introduced Williams by relating how he testified in Austin on behalf of the school district. There was a guy from Amarillo who wanted the school districts money, Poole said. Nobody wants plants that might explode or other dangerous things, but they do want our money.

Poole said that Williams stood up for Barbers Hill. Tommy said that even though it might benefit many districts, he would not throw Barbers Hill under the bus. It would have been very easy to play politics, but he knew it wasnt the right thing to do.

Williams touched on numerous issues, including the wildfires ravaging Texas. One of my cousins had to leave her home, Williams said. The states resources are stretched thin. I know the authorities are getting the wildfires under control, but the only thing that will cure this is rain. Please keep these folks in your thoughts and prayers; further west it feels like were living in a tinderbox.

Williams also touched on the current drought and the need for the reinforcement of Texas infrastructure. It was when Williams started discussing border security, however, that he began painting a picture of how serious the issue really is. Theres nothing that concerns me more about the future of our state than whats going on along our southern border, Williams said. I recently made three trips down to that area and saw border patrol agents trying to intercept drug dealers.

When you start looking at the statistics, its pretty scary.

Williams said that the amount of money traveling across the Texas border is close to $25-32 billion per year. 80 percent of that money is from marijuana sales, Williams said. We have to decide in our country and our state how were going to deal with this. California and Colorado have effectively legalized marijuana use, but it hasnt cut off the illegal drug trade.

Its funding a huge criminal enterprise, and the spillover violence is having a huge effect on our country. The casual tolerance of marijuana is fueling the drug industry.

Border security, Williams said, isnt just about stopping drug traffic. In about a years time we capture 300 to 400 special interest aliens coming into Texas from Mexico, Williams said. These arent the folks coming here to work. These are people from Afghanistan, the Sudan, and other countries known to harbor Al-Qaeda influences.

Williams applauded the Department of Public Safety for their role in securing the border. These terrorists are smugglers and traffickers. These are not nice people, Williams said. But they are scared to death when the DPS shows up. They say its because they dont know what theyre going to do, that the DPS personnel are crazy.

We want them to think youre crazy, Williams said with a laugh. And what Ive found is that the Border Patrol, Immigration and Customs Enforcement, they dont call the federal helicopters in. They call the states DPS guys, because they are willing to fly in dangerous conditions. Theyll go out when the feds wont.

Williams was frank about the severity of the issue. People in other parts of the country dont understand how bad this is, Williams said. Interstate 10 eastbound is a major drug thoroughfare, and its only a matter of time before they see the drug violence in their own areas.