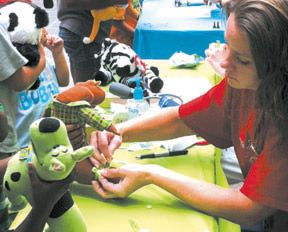 Throughout the event, the childrens patients  stuffed animals of every shape and form  were given the utmost care by members of the hospitals staff. The goal of the program is to take some of the scariness out of being admitted and treated by the hospital.

Outside the hospital, representatives from the Houston Dynamo professional soccer team gave youngsters a chance to shoot a soccer ball past a goalie in an inflatable tent, while carnival games, snow cones and face painting were also up for the taking. Representatives from Baystar Ambulance Company were on site to give tours of an ambulance as well.

Once inside, children and their patients went through a step-by-step process. First their toys were admitted to the hospital, with representatives asking what symptoms the stuffed charges had; were they sick? Did they have an accident? What was ailing them that day?

From there, the stuffed animals were taken into assessment, where tests were given to determine what their symptoms meant. Temperatures were taken, reflexes were checked, and then the children took their patients onward through the process.

Children saw how the hospital staff administers intravenous fluids, and how they check actual patients respiratory systems. Staff were on hand to put pretend casts on stuffed toys that may have taken a tumble or two, and representatives from the hospitals dietary division gave tips on healthy eating, both for the kids and their toys.

Ultrasound technicians examined the imaginary contents of the patients stomachs, and pharmacy staff put on a puppet show that illustrated the importance of taking medication correctly.

Representatives from the Baytown Police Department were there as well, measuring the kids height and weight and providing the opportunity for families to pick up identification cards with their childrens vital information and photo.

Though the event was held with tongue in check, it does serve a valuable purpose  showing kids that the hospital is there to help them, and to relieve some of the fear that can come with a hospital stay.