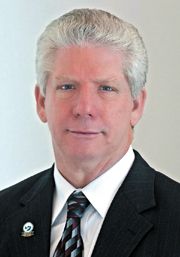 After a five-month national search, Lee College regents have announced the appointment of Dr. Dennis Brown as president of Lee College.

The announcement came at a regular meeting of the board Thursday, Nov. 17.

The resignation of current President Dr. Michael Murphy is effective in December. Thirty-eight applicants from across the nation expressed interest in the position.

We are very pleased with both the quantity and the quality of our candidates, said Regent Keith Coburn, chairman of the 2011 Presidential Search Committee. The result shows that Lee College has a very positive reputation among community colleges nationally.

We are delighted to work with Dr. Brown, added Mark Himsel, chairman of the Lee College Board of Regents. We look forward to his leadership.

Dr. Brown brings extensive experience to the position, having served twelve years as vice president of instruction and chief academic officer at El Paso Community College (EPCC), a comprehensive urban college with 30,000 credit students and 8,000 continuing education/non-credit students. He rose through the academic ranks at EPCC, serving as faculty member, chair of the Communications Division, and associate provost in a career that began in 1970.

A recipient of the Innovation of the Year Award from the League for Innovation in the Community College, Dr. Brown has also served as president of the Texas Community College Instructional Administrators Association, and statewide project director of the Texas Professional Development Consortium. He has written and managed several state, federal and foundation grants, published several articles, presented at more than eighty state, regional and national conferences, and testified at national commissions, the United States House Sub-Committee on Postsecondary Education and the Texas House and Senate Committees.