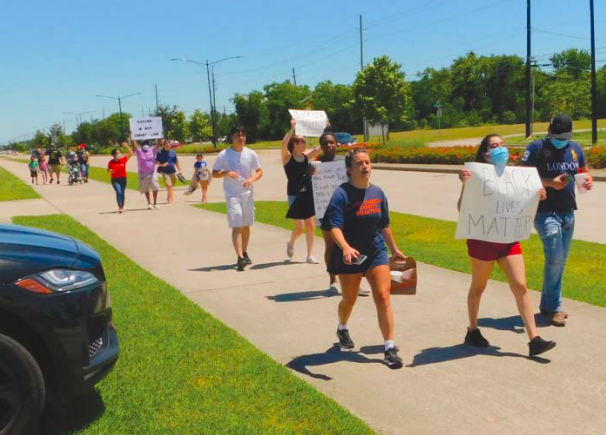 Protestors numbered about thirty and it looked like someone’s Sunday School Class had made signs, undertaken to march and shout, “Black Lives Matter.”

It seemed that police presence was nearly equal to protesters. Local patrol vehicles were plainly visible and white vehicles with the trademark search lights had uniformed officers in some. There was no police interferance in the protest and it was rumored that the extra police presence was to protect marchers from various locals that held contrary views.

Key issues mentioned by marchers when approached were qualified immunity for police, chokeholds, the use of body cameras and the experience of Deandre Arnold at Barbers Hill High School. Arnold’s dreadlocks were found to be in violation of a school’s code and he was suspended for the violation. The incident drew national attention in light of dreadlocks originated within a religion as a cultural distinction.

When asked if Arnold’s family had agreed to obey school codes, one answer was, “They had no choice but agree to the school codes to go to school. When the Superintendent enforced the codes they instituted a cultural and racial imperative that is unjust.”

Organizer Martha Atonal said, “We have a variety of people here that came to show their support peacefully. Many of the young people are from Barber’s Hill High School with a recent experience, it is very rewarding to see.”

“This is a critical time in our nation’s history and we have made the decision to express our solidarity with ethnic minorities to stop killing and abusing them,” said another marcher.

George Floyd died on Memorial Day in Minneapolis, and bystander’s video shows a police officer kneeling on the side of his neck to subdue him, resulting in his death. Massive protests in cities across the nation began and a sweeping discussion about race relations, reform of policing and demonstrators continue to peacefully protest across the country.

Houston’s Mayor Sylvester Turner at a news briefing that day said he was “taking some immediate steps which we believe will create a much better system for everyone involved.” Officers should only use the amount of “objectively reasonable force necessary” when dealing with suspects or prisoners.