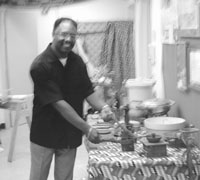 BARRETT STATION– Barrett Station’s rich cultural heritage and the important of church in developing that community are among the features of a Black History Exhibit currently on display at the Riley Chamber Community Center.

The display is open Monday through Fridays from 9 a.m. to 4 p.m. through the end of the month.

The Rev. Malcolm Barrett, director of the center, said that he was excited about this year’s exhibit. “It is fantastic,” he said. Among the items featured in the exhibit are elaborate survival tools such as a lantern, waffle iron and animals traps dating back to the 1920s.

The exhibit also features household items from the late 19th century as well as ornamental figurines which were often given as gifts.

The community’s strong ties with its churches are featured in a display of photographs of the community’s early pastors who led their parishioners in their spiritual development.

Bobbie Fae Yarbrough-Session will return to Barrett Station as the guest speaker for the event.

Session is a actress who made her professional debut in the 1986 ensemble production of “Long Time Since Yesterday.”

Other productions she has appeared in are “Shadow Box” “Gifted and Black,” “Don’t Bother Me I Can’t Cope” and “Romeo and Juliet.”

Sessions, a theatre arts teacher ay Forest Brook High School, is the founder and director of the group All God’s Children. She was also the assistant director of the film “Red Ink.”