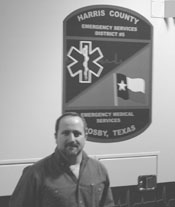 CROSBY- The Board of ESD#5 promoted a new General Manager of ambulances for Crosby, Barrett Station and Huffman.

Houston Hooper, an experienced field supervisor is now the General Manager for ESD#5s pre-hospital emergency services. Hooper brings an impressive resume that includes being a teacher at San Jacinto College, full paramedical certification and years of experience in the Crosby area.

Cary Avey, the former General Manager, remains as a consultant to ESD#5 and still serves as a pre-hospital emergency provider in Crosby. His advise to the board continues to assure a smooth transition as it did in the burgeoning past two years (in which Crosbys area of service grew to encompass Huffman, while crews coped with transformed entities and began operating at highest levels of service provision.)

Sources say Avey decided to pull back from the overall coordinator position at the present time. It was at Avey’s request and based on extensive hours as of investment and keep all other commitments.

In spite of the boards continued praise of Aveys contributions, they issued a statement saying, The changes will in no way alter the course toward improving the service in providing the community with the highest level of pre-hospital care.

Hooper, a Channelview resident, seemed pleased with the promotion, Ive never worked for a better board, they are active and concerned with getting this community the best service possible.
With Hoopers extensive service record and qualifications however, one has to wonder why doesnt he continue working for higher paying services as the City of Houston,

What I like about working with this crew is that it is all teamwork. Everyone does what they are here to do. We get along without distinction of paid and volunteer staff.