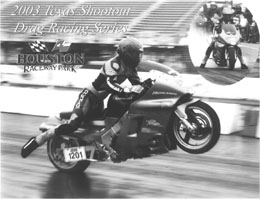 BAYTOWN  Highlands Kawasaki Bear Racing is off to Atlanta, GA. this week following a dramatic win in the opening round of the Streetbike Shootout in Texas Shootout at Houston Raceway Park last weekend.

The local motorcycle drag race team is considering going international if their new team expansion/addition and national standings stack up to expectations this year.

On March 30, Brian Dunham consistently ran off and left competitors in the fastest bike contest, Streetbike Shootout, on a motorcycle built last year by team Highlands Kawasaki Racing, a ZX-11 Turbo. The bike won the Texas Shootout Championship in points last year. It was Dunham’s first time on a turbo. The bike was so fast it nearly left its rider behind during qualifying.

Teammate Gilbert Coronado was a disappointed runner up in the Street ET competition with .001 of a second break-out on the last pass of the eliminations. Coronado’s reaction time had been .501, .502, .501 where .5 of a second is a perfect start. In the final round, his reaction time was .499.

Said Coble, I could tell he had the raw talent and all I could do was help him stretch it out. No one had ever tried to match his potential with enough power until I could put the right equipment under him and have him handle it. said Coble.

Coble beams with pride concerning Dunham’s development Brian seems to have all the capabilities to make one great turbo rider. As he progressed, we began training him for Jeff Peck’s bike of last year. All Brian needed to win this weekend was the confidence a successful ride would give.

But it didn’t come easy, in qualifying Dunham clung on by the narrowest of margin to a near vertical motorcycle. Struggling he managed to get the front down just before the Turbo kicked in and blew past an astonished opponent in the last .011 seconds of the quarter mile heat.

The racing team is off to Atlanta Raceway Park for the A.M.A. Prostar National Motorcycle Drag Racing events April 5. According to Team President, mechanical and technical crew, Jeff Peck, who experienced technical difficulties this past weekend’s bike will be fully lined out for Atlanta.

Coble added a heavy hitter to his technical team in the person of Pierre Labuschagne, Director of Kawasaki Racing South Africa and owner of Bear Racing out of that same country. Coble partnered with Labuschagne to handle new technical adaptations.

Of the new teaming, Labuschagne seemed even more enthusiastic about his new American buddy, Keith is one of the few people taking this sport seriously. So, I came here to help him win at that effort.

In response to questions about adapting to Texas Labuschagne was even more enthusiastic, My experience in Texas has been from coming from the minor league into the big league. We are getting ready in July to tackle an international track. I’m trying to get Keith going on the drag races on that level over these next two years. This must be done on a very priority level. A guy like Keith has going over a normal guy is that normally they see the event as just another, Keith really gets into a commitment to winning the race, invariably. Really believe Keith is going to be a major force to be reckoned with among the top racers in the country this year and probably in the world if we can get to Gosthfoeth Raceway International. “