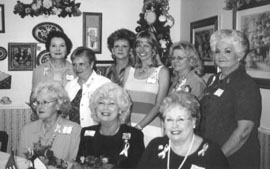 HIGHLANDS– Members of the Pilot Club of Highlands attended the monthly meeting and installation of officers on Monday, June 2 at the Teapot Depot, where they enjoyed a delicious dinner. Special guests were welcomed, including members of the Evening Pilot Club of Baytown, and the Pilot Club of West Chambers County. Debbie Rhodes, District Lt. Governor performed the installtion of new officers for the year 2003-2004.

Laura Dean presented special awards to Sue Norris and Sandy Gross and Becky Baumbach reported that the club received a trophy for Best Theme for the Relay for Life. We all were so thankful that it rained during most of the evening, that we gladly got soaked getting to our cars.