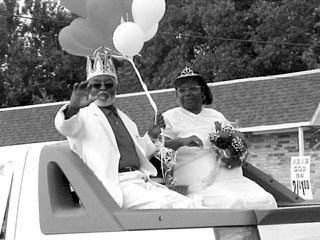 BARRETT STATION Organizers of this years Barrett Station homecoming celebration say that this is one of the biggest and most well-attended events they have had in years.

The celebration is designed to bring together friends, family and alumni from Charles Drew High School and Drew Intermediate School.

While the homecoming reunion was on July 19, events actually started a week earlier with a kickoff celebration at the Shiloh Missionary Baptist Church. Willie Goodlow, president of the Barrett Station Civic League, said that since church plays such an important role in the Barrett community it was only natural that they should be included in a homecoming celebration. She praised the efforts of the Barrett Ministerial Alliance in helping with the effort and bringing parishioners of different denominations together to celebrate in unity.

On July 15, the Fifth Annual Queen and the First Annual King contest was held at the Riley Chambers Community Center.

This years senior queen is Evelyn Jacobs while Jquayla Paul was named the teen queen. Isaac Outlay was named the first ever king. In addition to this contest, several other groups held pageants as well, naming their own sweethearts.

D.B. Jazzy Mike provided live entertainment the evening of July 18, as the community came together at Barrett Primary School for the Charles R. Drew Reunion Mix and Mingle.

Activities continued the following morning with a parade down Crosby-Lynchburg Road. This years parade featured over 50 units including floats, pageant winners, Constable Ken Jones, a pair of motorcycle clubs, and an equestrian club.

After the parade, the Fifth Annual Health Advisors Community Health Fair was held at the Chambers Center. This health fair featured a selection of health screenings from local doctors, the Brentwood Mobile Unit, and immunizations provided by the Baytown Health Center.

The celebration came to a close Saturday night with a reunion at Barrett Primary. The keynote speaker for the night was Leon C. Anderson of Austin. Anderson, a poet and writer, told about his experiences growing up in Barrett Station and how he applied those lessons learned to his life outside of Harris County.