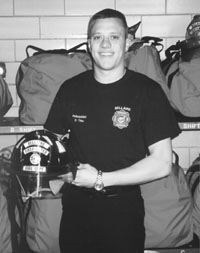 HIGHLANDS– The Highlands Chamber of Commerce held their installation luncheon and Awards ceremony last Thursday noon, and ended up with a new president, a new board (partially), and 4 important Public Safety and Service Awards to essential members of the Community.

In addition to the installation, Awards were presented for community service. These included the top award, the Terry Davis Award, to Highlands/Bellaire firefighter Deacon Tittel. Deacon was cited for his service to two fire departments, his recognition as Firefighter of the Year by Bellaire and Harris County, and the offices and accomplishments he has held with the HVFD. He also has been active in community events such as the Sports Association, as a coach and board member.

Wanda Asbeck reminded the large crowd gathered for lunch that plans were underway for the annual Jamboree, scheduled for the first weekend in October.

The keynote address was presented by Judge Mike Parrott, speaking on Responsibility and the heroes of community service.