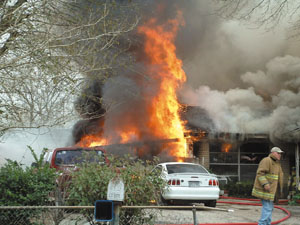 About 60 seconds after the woman was being treated by medics outside the house, the structure collapsed, exactly where she and firefighters from Crosby and Sheldon had just been.

The potentially deadlly situation was called in to 911 Dispatch that Friday at 12:29 p.m. According to Crosby VFD, the fire had started in the garage and spread quickly throughout the home. All entrances were engulfed in flame when Crosby VFD and ESD#5 arrived and took charge of the scene.

The 85 year old woman was trapped inside a front bedroom, with only a narrow window for escape. Flames came out of the roof as two fire fighters volunteered to enter that narrow opening. Justin Reed of Crosby VFD and an unidentified member of Sheldon Fire Dept. breached the narrow opening and searched to find the woman in the dense smoke- filled inferno.

According to Justin Reed, It was so smoky, I couldnt see the woman, I had to feel around for her, let alone be aware of who was assisting.

When I climbed back through the window another fire fighter saw the blood on my hand and took me over to the other paramedics. I still wish I knew who it was in that room with me!

It took both mens utmost strength to hoist the woman (weighting between 200 to 300 lbs.) up to the window and the efforts of several emergency rescue workers on the outside to lift her through the window to safety. Concern now was for Reed and the Sheldon fire fighter still inside. With herculean effort the two escaped the flames.

Reed was injured by glass while lifting the woman through the bedroom window and received eight stitches to his hand.

I did nothing that any other fire fighter wouldnt have done, said Reed, I was extremely concerned about her condition. When I returned from the Emergency Room I was informed by her granddaughter that she was doing fine, and was extremely relieved!

ESD#5 Medics worked on the woman next preparing her for transport. Compliments from the Memorial staff were extended to paramedics for a job well done in life-sustaining efforts, because she had inhaled dangerous amounts of smoke.

A LifeFlight helicopter flew the woman to Hermann Memorial Hospital where she was treated for smoke inhalation, and was reported in good condition after the harrowing ordeal. Reed was praised for his heroic efforts by other firefighters on the scene.