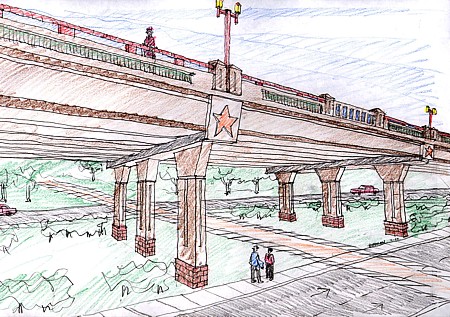 CROSBY- Officials from TxDot met with representatives from the Crosby/Huffman Chamber last week, to discuss design details of the proposed overpass over the railroad tracks in the center of old town Crosby, and to hear of the latest schedule for the project.

Representing the Chamber were Nancy Oliver, Velma Ellison, Larry Koslovsky, and several other members of the committee. Also present was Gilbert Hoffman, publisher of the Star-Courier and also a practicing architect who has been helping the Chamber in their discussions with TxDOT on the esthetic details of the overpass.

Hoffman presented a sketch which represented some of the details that the committee has expressed an interest in seeing incorporated in the design. These included antique or traditional lighting fixtures, an eclectic railing design, supporting piers with an historic or masonry look, an ashlar stone look to the concrete retaining walls on the ramped areas, and a landscaped area where dedication bricks, with donors names, could be laid to memorialize the communitys contributions to the project.

In addition, TxDOT representatives showed photos of a design that had recently been built in Beaumont, at the Laurel-Liberty exit, that seemed to incorporate many of the themes that the Crosby group envisioned. It was agreed that further development would try to blend these two images into one scheme, that would be delineated by TxDOT and presented to the committee in a few months. The TxDOT representatives also indicated they would try to work with the community.