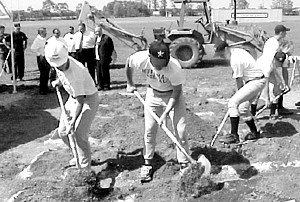 HUFFMAN- The Huffman ISD administration, trustees, students and community wrote another page in the history of the district last week, when they held a groundbreaking for the new $21 million Hargrave High School.

The groundbreaking took place on a plot of land west of the current high school.

The ceremony began with a welcome by Hargrave Principal Robert Schnuriger.

The high schools Army JROTCs color guard posted the colors, while the Falcon band played the Star-Spangled Banner. The JROTC will be a direct beneficiary of the new school as they will receive a larger building for their classes.

Focusing of the Huffman ISD of the past, Board President Jerry Jones gave a brief history of the school district from the first school which opened on FM 2100 in 1915, to the last countyrun school to operate in Harris County in the late 1920s. In 1967, the first Jr. / Sr. high was built, in the area now occupied by the tri-campus complex and in 1974 the first Hargrave High School.

The new Hargrave High will open in the fall off 2005.

Jones said that the new school will address continued growth in the district, growth he attributed to the quality of the schools. Folks, he said, Were a recognized school district with exemplary schools.

It is important that we honor the past as we look to the future, said Steve Myers, superintendent of the district.

Myers thanked the community, bond committee and staff for their two years of effort that culminated with a successful bond referendum in 2003 which provided financing for the construction.

He also recognized Bobby and Cynthia Holcomb, who were representing the late Willie Hargrave. Hargrave donated the land on which the 1974 school built and Myers said that it was only fitting the new school continue to honor him.

He then invited trustees, members of the administration, community and building crews to break ground.

Myers then told the crowd that the school belonged to the whole community and invited students as well as those in attendance to grab a shovel and turn some dirt.