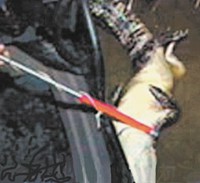 HUFFMAN-A recent alligator attack on a dog has brought to the forefront the conflict of man vs. nature, forcing residents along Lake Houston and San Jacinto River to keep an extra eye out for the reptiles.

According to reports, Leslie Santiago saw her small dog being attacked by an alligator. She reportedly used a cement brick to injure the alligator and rescue her dog.

Once Texas Parks and Wildlife was alerted to the situation, they called Newsoms Wild Animal Control to conduct a search and extraction for the alligator.

Jason Newsom said that his company has a contact with Parks and Wildlife to perform nuisance cleanups in local waterways. After a four day search of the lake, which was hindered by weekend rains, Newsom said they located a 7 alligator which they removed and sent to a farm they own in East Montgomery County. The alligator, he said, will later be introduced into the wild.

During interviews with residents, Newsom said that he was told there another four to six of the same size wer spotted recently. He is currently in discussions with Parks and Wildlife to remove these as well.

Newsom said that it is likely that the alligator he caught was not the one that attacked the dog, noting that it was probably between 3 and 4 feet long.

Alligator are commonplace in the lake and river, Newsom said. This is their natural habitat. That lake is completely full of them and people have no idea theyre here. Newsom said that the alligators are relatively harmless, but that interference by people has aggravated the situation. The biggest problem with alligators, Newsom, is that people have begun feeding them which breaks down their natural fear of man.

People feed the alligators, then theyre [the alligators] not afraid of them and even get use to them (the people), said Newsom. Thats definitely not safe for kids.

Newsom warned that people who use the waterways for recreation have to exercise extra caution, since they can never know when the reptiles are present.

A spokesman for Parks and Wildlife said that the dog attack is unusual and that generally alligators prefer dead prey and they will usually attack only if provoked.