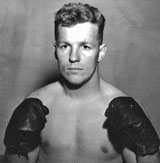 Jimmy Lane, former Crosby resident, West Virginia native, former boxer and now a retired Texan living in Athens, Tex., wrote a book a couple of years ago. Surviving the Hungry Years, was published in Huntington, W. Va. I picked up a copy of this paperback at the Crosby/Huffman Chamber of Commerce office earlier this year.

Semi-retired Huntington sports columnist, Ernie Salvatore, wrote the foreword to Jimmys book. Jimmy Lane didnt look like a hungry fighter. His blond, blue-eyed good looks and his flat stomach suggested a different line of work. Movie star, maybe? Far from it. As one of eight Lane children of an often unemployed candy maker, Jimmy Lane was always hungry, whether it was for success in the ring, or for searching for a square meal at a real dinner table with tablecloths and cutlery. He was, in a word, ravenous.

Salvatore goes on to say Jimmy Lanes story is a good one and itll take you many placesAbove all, he writes the way he foughtopenly and honestly, and he scores another knockout. What more can anyone ask?

It would be easy to go on about the things this sports writer says about Lane but that would only be half the story about the man who lived on the Crosby-Dayton Road for about five years while working for the Crosby ISD. He had already retired once from Tyler Junior College and hung it up again about two years ago when he moved to Athens. His daughter and son-in-law, Phyllis and Jerry Blizzard, continue to reside on that same Crosby-Dayton Road.

Lane was a fighter of note during his younger years. He fought as an amateur in West Virginia, Ohio, Pennsylvania, New York and Illinois for a number of years. He was once the bantamweight Golden Gloves National Champion. Later he turned professional while fighting in New Orleans. For several years he fought in the New Orleans and Houston areas winning far more than he lost. During his career he had 150 bouts from the bantam to welterweight classifications. He won 93 of 100 amateur fights and 43 of 50 professional bouts.

Some of those were in the Houston area where he fought in the old Sam Houston Coliseum. In the Big Apple he fought, with distinction, many of the top boxers of his day. He was one of the fighters in the last feature fight held in the old St. Nicks Arena which has long since been torn down. He believes he fell victim to less than honest judging several times in New Yorkthree as an amateur and once as a professional. This fight was one of those one judge voted the bout even and the other two voted for Lane yet the decision went against him.

As a youngster in Huntington, Lane and his siblings were frequently hungry and he tells of this in his book. That didnt change significantly until he entered the Army. He spent 18-months in Europe and spent much of his time boxing. He toured much of the continent boxing with other soldiers and made an excellent account of himself. He won the Com Z championship that at the time was all of France. Later he won an European Championship.

In my discussions with Jimmy I learned he married a Houston girl 37 years ago who saw him for the first time on television in a bout at the Sam Houston Coliseum. Most of the time he was boxing he also held a full-time job. He worked several years in Houston with Armour Meat Packing in addition to employment at Tyler Junior College and the local ISD position. Now it is only retirement for Lane. His book continues to be available at the Crosby Chamber office at $9.95.

Such are the people, places and things that have touched my life in my West Virginia home!