Racer killed in St. Louis had local ties and fans 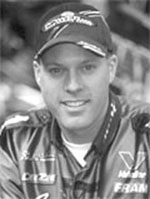 Darrell Russell, Top Fuel driver for Joe Amato Racing, was fatally injured Sunday after a violent crash in the second round of eliminations at the Sears Craftsman Nationals in St. Louis.

The thirty five year old had strong local ties. He resided on his ranch in Hockley with his high school sweetheart and wife of nine years, Julie. His crew chief was Wayne Dupuy, whose father Lynwood Dupuy is Director of Dragstrip Operations at Houston Raceway Park (HRP) in Baytown. Russell has many friends, family, and fans in the local area.

On the HRP message boards, fans are suggesting that the dragstrip at Houston Raceway Park be named Darrell Russell Drive as a memorial in honor of the hometown race champion.

Crosby race fans J. C. and Donna Davis were watching the televised race and found the accident just unbelievable. It really floored us when it happened, said Mr. Davis. We have watched him ever since he was Rookie of the Year (in 2001). He was just a good, clean racer, and such a super nice fellow.

HRP and the local chapter of Racers for Christ (RFC) are jointly planning a memorial and tribute to Russell next Saturday, July 3rd, at 4:00 p.m. The Park will interrupt its scheduled Clobberthon event to remember Russell. Plans are not yet finalized, but
RFC chaplain Ted Jones of Mount Belvieu will participate, and Lynwood Dupuy is also expected to speak.

Every racer has a passion for racing, and their purpose for being there is to win that trophy. This weekend as Darrell crossed the finish line, he met his destiny, but this time his prize was heaven. And unlike a trophy, this prize is eternal, commented Chaplain Jones.

Jones also recalled observing Russell as he interacted with children from the Galveston Burn Center last April during the OReilly Spring Nationals at Houston Raceway Park. At that moment, his mind was on the kids, and not on the race ahead. That tells you what kind of man he was.

Funeral services will be held at First Baptist Church in Tomball at 11:00 a.m. on Friday, July 2nd. Larry Smiley, the National Chaplain of Racers for Christ, will officiate.

Darrell attended our chapel services, and of course everyone knows about his engaging smile. He had a real love for people, says Smiley. I think his faith was behind all that. The RFC sticker on the racecar was a high priority for Russell, as well as Wayne Dupuy and the rest of the Amato team, according to the RFC chaplain.

A trust fund has been established for the Russell family. Donations may be sent to Darrell Russell Memorial Fund, Partners Bank of Texas, P.O. Box 60369, Houston, TX 77205.

Russells dragster went out of control and crashed at over 300 mph as he crossed the finish line on the quarter mile strip. The car appeared to shred a tire after the parachute was deployed, but the exact mechanical malfunction had yet to be determined at press time.

Russell was unconscious but still breathing on his own when he was rescued from the intact driver protection compartment and rushed by helicopter to St. Louis University Hospital. He was pronounced dead from head injuries about two hours later.

Russell was the 2001 NHRA rookie of the year. He was the third driver in NHRA history to win in his first start. He had six career Top Fuel victories, including two weeks ago in Columbus, Ohio.

Russell finished in the top ten for the POWERade points competition all three years of his professional Top Fuel career. He never posted a DNQ in his career, with a qualifying streak of 70 races. He was the number one qualifier in the St. Louis race, with a best elapsed time of 4.511 seconds.

The Star Courrier staff extends our thoughts and prayers to Darrells wife, Julie Russell; his parents, Burnell and Gwen Russell; the Joe Amato Racing team; Rob Geiger; and all the race fans in our readership.