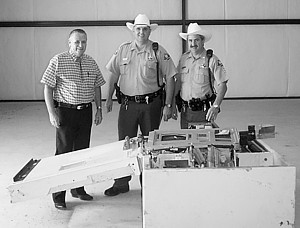 CROSBY  How would a man begin to convince anyone to help him steal a heavy truck, steal construction equipment and bring both to bear on a technically secure, almost two ton automatic teller machine embedded in concrete and steel at a bank on Main Street?

Well, perhaps some sales points to convince someone to come along might be: (a.) starting in the wee hours of the morning no one will be awake (b.) going many miles from base is easier (c.) at over 10 miles distance between the first and final theft no one will suspect what we are going (d.) follow an experience leader, (e.) use the back roads in which to hide, (f.) use your cell phones to call women friends if it gets hot and (g.) ATM’s are easy to open. Apparently, none of those sales points are as valid as convincing.

Precinct 3 Constable Ken Jones indicates some deputies under his command (with the backup from the spectrum of law enforcement) managed to turn all of those would be sales points against three individuals here on August 5 to make arrests in just such a case.

“The big reason for the quick apprehension was the response time. The first response was just under five minutes of being advised of the alarm. Then the quick action by the supervisor to determine the direction of flight and the men coming out in force and searching the highways and back roads. I am very proud of my people all coming together and putting in the extra effort for teamwork,” said Ken Jones speaking at the 14000 block of FM 2100 Crosby State Bank location.

Deputies make charges that Donald Gene Pifer, 55, his son, Donald Gene Pifer, Jr., 30, and Charles Scoot Cody, 31, allegedly loaded the ATM onto a truck stolen out of Mont Belvieu using a tractor loader stolen from the construction site where a proposed new drug store is to be and fled the bank.

According to bank personnel, the original sensory notice went off at about 2:48 a.m. Precinct 3 Constables say they took the full alarm call from the alarm company at about 3:55 a.m. and at 4:00 the first deputy arrived on the scene. Lieutenant Terry Ganey, the evening and night patrol supervisor, arrived on the call at Crosby State Bank’s newest Crosby office at about 4:12 a.m.

According to Ganey, “Well, the first thing I did was check the property and found tire marks and debris leading from where the ATM had gone missing from considerable force. I traced the tracks of the back up tractor from where it had been stolen from Motor State Survey Company. The first thing I did was call Deputy Morgan and the Sheriff’s Office to have an advanced look out on US 90, where tracks and debris indicated someone had cut the fence and headed out. I found the construction equipment with the engine still running. I could see where a dual wheel truck had drove out toward Krenek but the Canal was out. I followed where the truck had gone because of where the dew on the ground indicated. I had dispatch contact the Liberty County Sheriff’s Office, Dayton Police Department and all law enforcement that suspects had fled northbound on US 90 Shortly thereafter debris from the ATM was located on US 90. We took our best guess to search the back roads off US 90.”

According to Ganey, Deputy Rob Francis made the next break in the case by finding a truck stolen from Mont Belvieu on a cut off from Lord Rd.

“Once Deputy Francis went down to check on the truck he had spotted he drove up on them. Then of course they scattered like quail. They were trying to cut it open but left it to Deputy Francis running on foot through the woods,” said Constable Jones.

The deputy had apparently found someone had been trying to open the first of several security structures with a blow torch, unsuccessfully and so cooled down the metal. Now he was in possession of the truck, the ATM and the general location of three suspects. The deputies, about 18 in number established a general area of search.

According to Captain Jones at the Wallisville Substation, “Deputy Tyson was coming in from Dayton to work early that morning to help with this robbery and spotted three men walking toward Dayton at about the Liberty County line. That’s what we call a clue. He apprehended one of the three and noted the flight of two other suspects into the woods.”

According to an FBI spokesman, indictments had already been issued for the men. They were suspected of involvement in several other ATM theft’s in Beaumont, Port Arthur, Orange County, and Lake Charles, LA.

According to Captain Hagee this group appears to specialize in such thefts and includes a father and son team along with another man.

FBI Special Agent Robert King from Beaumont arrived on the scene early this morning and talked to one of the suspects on a cell phone and convinced the man to come out and give himself up.

Captain Jones indicates that each of the three men had a cell phone and each was trying to call wives or girlfriends for a ride away from trouble.

Later that morning some women came nearby and were detained by deputies, each claiming to know nothing about a theft of an ATM.

Having just that week spoken to one of the suspects, Agent King was able to identify one of the intercepted cell calls in the area. Later one suspect would attempt to call him back to ask him to get the dogs off of him and he would surrender to agents but not deputies. The agent convinced the suspect to surrender to the deputies and that they would

The last suspect was still running at around 9:30 a.m. this morning when a citizen notified authorities of a white male, with no shirt, who was trying to cross US 90 on foot which led officers to his location where he was arrested.

Officers from just about every law enforcement agency in eastern Harris County and Liberty County participated in the manhunt for the trio until about 9:45 AM Thursday morning when the last of the three was apprehended.