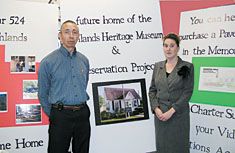 HIGHLANDS — Jim Strouhal presented an update to plans for the restoration of the Highlands Railcar #524, and Margie Elliott talked about the museum project and memorial wall that will be built at the site of the Highlands Chamber building.

Strouhal is one of the founding members of the Highlands Heritage Museum and Preservation Project, along with Roy & Margie Elliott, John Richardson, Vern Miller, Alton Neatherlin, Gary Wiggins, and Harry Johnson III.

The railcar now sits in the backyard of Mrs. Johnson on Battlebell Road, and volunteers are needed to help with the restoration work, Strouhal said.

Current work includes cutting away and replacing steel members of the car, and rebuilding windows. The windows are being built by a restorer in Dallas who specializes in this type of work.

Strouhal started his presentation by telling about the history of the Highlands/East San Jacinto area, based on new material that has been surfacing in the museum project. He reviewed the land grants, indian settlements, French influence, and the influx of Anglos in the 1880’s. Ship building was a major activity in Lynchburg at this time, he said. In the 1900’s William Terrell brought farming and canning to the area. In the 20’s Harry K. Johnson Sr. founded the Houston Northshore Railway. This history is available in a book for sale at the chamber.

Car #524, known as the Highlands car, was the last car to run on the system, and holds significance and much nostalgia for this reason.