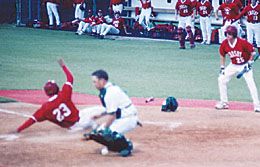 CROSBY — One the best seasons for the Crosby High baseball program over the past few years came to a close this past weekend with a pair of losses to the Brenham Cubs in a best-of-three series.

Crosby ends the season with a 20-7 record.
An inability to bring the runners home hurt the Cougars in the opening game, as they lost 8-0.

The Cougars strung together eight hits, but could not convert those hits into runs stranding 12 baserunners.

The long-ball sounded the death knell for Crosby in game two, as Brenham hit three home runs en route to a 11-3 victory.

Crosby fell behind early as Trey Buck gave up a solo homer in the bottom of the first inning.

The home run was an aberration for Buck, who threw a no-hitter a week earlier to clinch the district title for Crosby.

In the bottom of the second, Brenham picked up four hits, scoring twice more for a 3-1 lead.

Crosby got onto the scoreboard in the top of the third inning when Derrick Dalcour drew a walk. The fleet-foot Dalcour scored from first on a single by Eric Swendsen.

The flood waters hit in the bottom of the third inning when Brenham loaded the bases with a single, a walk and a bunt. The next batter went deep to give the Cubs a 7-1 lead. The Cubs would put one more run by the end of the inning.

Shannon Talbott led off the top of the fourth inning with a single. He later scored on a sacrifice by Eric Ledvina.

In the bottom of the fourth, the Cubs added two more runs for a 9-2 lead.

Kolby Kidder made it a 9-3 game in the top of the fifth when he took first after being hit by a pitch. The Cubs pitcher tried to pick Kidder off, but the throw was wide and he was able to score on the error.

Dusty Ashworth, who pitched the bottom of the sixth for Crosby, gave up a two-run homer to give Brenham a 11-3 advantage.