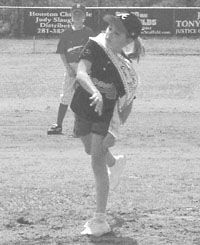 The Goose Creek school district disputed claims that there had been complaints about the Triangle Gun Shop, which is located across from Highlands Junior School. The allegations came out in an article printed in the Houston Press. Two escapees from the Liberty County Jail were recaptured.

The Highlands Volunteer Fore Department named Bobby Birdsong its Firefighter of the Year. Goose Creek said it would ask voters for $220.5 million in schoolhouse bonds.

A project raised by Kasie Myer was named Grand Champion Steer at the Huffman FFA Livestock Auction. The animal sold for $4,800. Two Dayton residents were killed in an explosion at the BP Amoco Plant in Texas City.

Faith Drews was named the Highlands Little League Queen. A Harris County Deputy wounds a suspect who was being pursued by deputies through a Crosby apartment complex after the suspect pointed a pistol at her.

Goose Creek voters approved $220 million in schoolhouse bonds. An 18-month old toddler was killed in a drive-by shooting in Huffman.

Miquel Castro was arrested for the shooting death of 18-month old Aiden Naquin in Huffman. In a political coup, several Chambers County officials switched party affiliations to the Republican Party. Among these was Judge Jimmy Sylvia. The ESD#4 in Huffman received four new emergency vehicles thanks to a grant from FEMA.

A sign was erected on FM 2100 honoring Crosby Medal of Honor recipient David McNerney. Change was in the air at the Dayton City Hall with Andy Helm hired as city manager and Steve Stephens defeating longtime incumbent mayor Larry Harris.

An explosion at a natural gas well on Kennings Road forced the evacuation of several Crosby families. The 59th Crosby Fair and Rodeo saw thousands of spectators over the three-day event.

Betty Michalsky was awarded the Highlands Chamber of Commerces Terry Davis Award for Community Service, the highest honor the chamber can bestow. A public memorial was held for Beach City resident Army PFC Wesley Riggs, who was killed by a roadside bomb in Iraq.

A truck, reported stolen in Mont Belvieu, was recovered during a drug bust in Liberty later the same day. Longtime Highlands dentist

Doc Herndon passed away at 83.

The New Property Owners Association of Newport announced preliminary plans for a fitness center and maintenance fee hike, which brought a negative reaction from some residents. Suzanne Machala and Frances Tisdale were named Crosby ISDs Teachers of the Year.

After Hurricane Katrina ravaged the Gulf Coast, volunteers from East Harris, West Chambers and Southwest Liberty Counties began efforts to aid the hundreds of thousands of Louisiana evacuees who came to the area. Voters overwhelmingly approved a 2-cent sale tax increase to benefit ESD #5 and ESD#80.

Millions of people evacuated the Texas Gulf Coast as Hurricane Rita made its way toward Texas. Rita hits Texas and millions of people are left without power from the Texas-Louisiana border to North-Central Texas.

Whitney Bell was crowned Miss Highlands and Kayla Neathery was named Junior Miss Highlands. A Katrina evacuee was arrested for murder in Mont Belvieu. This is only the third homicide in the city since 1986.

In a heated election Newport residents voted down a plan to build a fitness center. A move to remember members of the NPOA Board of Directors failed among criticism of voting irregularities. Laron Brady was elected Crosby Homecoming King. Brittany Smalley was named the Sterling Homecoming Queen.

Deer Park voters approved $110 million in school bonds. Plans were announced for the Crossing at Highway 90, a new shopping center that would be anchored by a Starbucks Coffee shop.

The NPOA failed to throw out the results of the October election that had been challenged by some property owners. A monument in memory of fallen Beach City soldier Wesley Riggs was dedicated.

A fire at a Crosby doctors office sparked an investigation by the county fire marshals office. The Texas Department of Transportation said it would begin letter contracts over a FM 2100 overpass in 2008.

Crosby teen Shane Ballow was killed when an Amtrac train near Lindstrom Road hit him. A Dayton woman survived an assassination attempt.