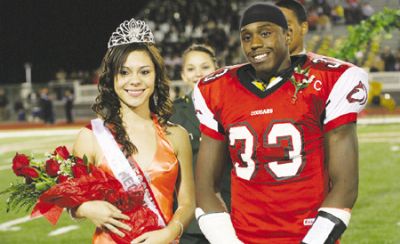 By BOBBY HORN JR.
CROSBY-The Crosby Cougars kept their playoff aspirations alive Friday night with a 42-20 Homecoming win over the Galena Park Yellow Jackets.
With a 3-1 district record, Crosby is now tied with two other teams for second place in district with the top three teams advancing to the postseason.


The Cougars were a juggernaut against Galena Park, racking up 512 yards of offense.
Durran Stark put the Cougars on the board in the first quarter with a 17-yard touchdown run. He rushed for 74 yards on six carries in the game.
Midway through the first quarter Chance Casey made it a 14-0 game with a two-yard run. Casey led the Cougars with 148 yards rushing on 15 carries.
Stark showed that he could throw as well as run in the second quarter with a 39-yard TD strike to Caleb Randolph. He went 10 for 20 for 223 yards on the night, while Randolph had 67 yards receiving.
Two minutes later Galena Park got as close as they would for the night with touchdown pass.
Casey would increase the Crosby lead to 21-6 with 5:25 left in the second on a one yard run.
With just over a minute to go in the first half, Jesse Moore scored on a 50-yard pass from Stark. Moore had 95 yards on four catches.
This gave Crosby a 35-6 halftime lead.
The Cougars would score once more in the game, when Casey ran the ball in from the five-yard line in the third.
The Yellow Jackets put up two touchdowns in the fourth quarter. The first came on a 55-yard fumble recovery and the other on a running play.
While the offense put points on the board, the Cougar defense kept Galena Park off-balance with turnovers. Crosby forced one turnover on a fumble while Alvin Baptise and Ryan Weatfall each had an interception.
Cougars Head Coach Kevin Flanigan said that he was proud of the way his team performed Friday. Usually with the events that surround Homecoming players tend to get distracted, he said, but the team really showed their focus.
The Cougars will travel to Forest Brook this week. The Jaguars are coming off a loss to Hargrave last week.