One dead in game room robbery in Highlands 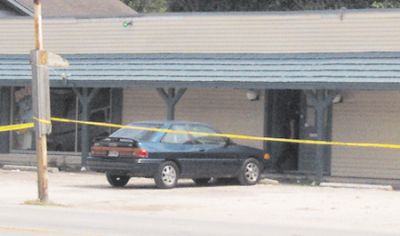 HIGHLANDS  A woman employee of the Green Room arcade shot herself and a robbery suspect at an alleged eight-liner arcade early Monday morning.
On October 9 at about 4:58 a.m., calls went out for ambulance service to 509 North Main. At 5:12 when they arrived, medics immediately called for Lifeflight helicopters for a robbery suspect, and transported an unnamed female employee to Hermann Hospital by ambulance.
Circumstances are sketchy but witnesses agree it happened pretty quick. Just after 4:30 a.m. two men entered the Green Room Game Room. Two suspects set about robbing the arcade after a few minutes of apparently casing the surroundings. One, detectives say, started robbing a male customer of his wallet with the added touch of striking him on the head, another threw a female clerk on a table.
That clerk pulled a .32 caliber pistol and while struggling with a suspect shot herself in the elbow. Next, she shot Tomma Hiawatha Waid in the upper thigh. The suspect that had thrown the clerk onto the table fled the scene on foot.

The escaping suspect has much to worry about since deputies have information on him. He is described as a black male, 5 feet 8 inches in height and weighing about 180 to 200 pounds.
The bullet fired into the other suspect apparently severed the femoral artery in his thigh. Waid was said to have required C.P.R. on the helicopter and in the Hermann Hospital Emergency Room but did not recover from surgery, and was pronounced dead.
Harris County Sheriffs Deputies indicate lots of reasons not to play the local arcades, most of which have to do with limited security. Then there are laws prohibiting gambling in Texas. According to robbery Sergeant Pair, another recent robbery of an arcade in Harris County resulted in an armed guard being robbed of his gun and patrons also robbed.
At the scene Monday, a Vice Squad Detective when questioned by the press, Will other charges be filed? answered with, Almost certainly.
The shooting will be referred to a Grand Jury.
Anyone with more information on the escaped suspect is asked to call Harris County Sheriffs Robbery Division at (713) 967-5770.