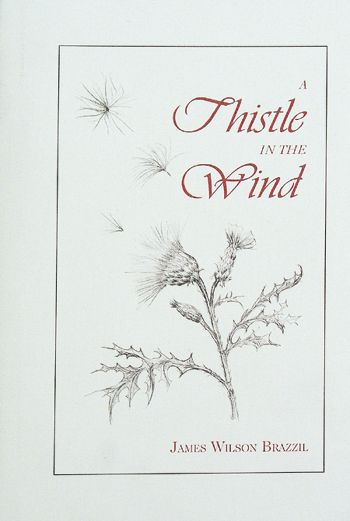 By DON SPRINGER
HIGHLANDS He was raised on a farm and at age 21 wanted to leave and begin a career as a country newspaper writer and editor. This third of ten siblings didnt want to move on without his fathers permission so he sat down for a man-to-man talk with Papa.
Son, his father said. If you want that job with the little paper, go get it..But its a tough old world out there, and if you cant make it, come back on the farm. I dont want you bummin round the country, hopping freight, dead broke and going hungry. I dont want you floating around like a thistle in the wind.
So he was off for a newspaper career that lasted more than 40 years40 happy years, and a writing career that went far beyond that. Now retired, this dapper, energetic Highlands man is preparing for a book signing for his third book. It will be from 6 to 8:30 p. m. this evening (January 25) at the Highlands Community Center.

We speak of James Wilson Brazzil, who worked for ten newspapers in his career, the last 20 years as editor and co-publisher of the Highlands Star. Better known as Jim to his friends and neighbors, he is now widowed (since May, 2002), continues to reside in Highlands and recently completed his third book A Thistle in the Wind.
Back in 1988, he authored his first book, Owl Creek, named after his Texas hometown area and followed with another in 1994, The House of Coot. He says this will probably be his last. This writer sat down, after completing an interview, and read A Thistle in the Wind, It was found to be interesting, enjoyable and a good summation of a mans life that got printers ink on his hands at age 2l. He is now 91 and if you look closely at his hands one would find that ink deeply imbedded there.
He never lacked for desire, ambition and knowledge of what he wanted out of life. He wanted to be a newspaperman. He wanted to write. He persevered through some false starts before finding his pot of gold at the end of the rainbow. He found Highlands.
But that gets ahead of the story.
Jim Brazzil took that job with the little paper, at The Copperas Cove Crony, near Gatesville, Texas. He wanted to write, and did some writing over the next few years, but most of the time he was on the mechanical side of the newspaper. He became a linotype operator and wrote only when he had time or was given the opportunity.
Those were Depression years, followed by World War II and then the post-war period. During this time Brazzil worked on about nine newspapers, as well as wrote articles in the Army. Some of his articles were done in the Philippines. He writes of working on these mostly small papers and his Air Force experiences in A Thistle in the Wind.
Those years saw him marry Bonnie Joe Malone in August 1940, father a son that died shortly after birth and later two daughters and another son. In addition to Owl Creek, Copperas Cove and Gatesville, Brazzil and family lived in Madisonville, Littlefield, Brownfield and a few other well-known Texas towns like those. His military period took him to the Philippines. Bonnie Joe got tired of moving, the kids got tired of moving and Brazzil says he once felt his fathers words thistle in the wind described his life but I never hopped a freight. Money was not exactly in abundance either.
Brazzil never lost that urge to own and edit his own paper. Over the years his brother-in-law, Alton Neatherlin, was traveling many of these same journalistic roads. At this time the two found themselves at the same places at times working side by side. Neatherlin had that urge also, and the two talked of their own newspaper on occasion.
The next to last stop for both was The Daily Sentinel at Nacogdoches. Here the urge became too much as the pair decided to strike out on their own but had little money to make such a move. Their Sentinel boss knew of their desire, helped as much as he could, and they got a lead about a little town near Houston that had no paper and needed oneHighlands.
Alton and Jim looked the situation over, talked to businessmen in Highlands, searched for used equipment, a building, other supplies and made the plunge. They became co-publishers of the Highlands Star. They had reached their rainbow. Brazzil edited the paper for over 19 years before selling out to Alton and went into semi-retirement. He later ran another business, Jims Office Supplies, for eight years.
As co-publishers the two started the Crosby Courier as a separate newspaper. They later found that not to be profitable and merged the two. With this the Star Courier was born.
Brazzil has a great love for Highlands, its people, the changes he has helped bring about and the family that now surrounds him. He authored A Thistle in the Wind, but it was a true family happening. Daughter, Bonita, did all the illustrations, daughter Susan, edited the book, granddaughter, Laurie, did the design and typography, and granddaughter Leslie, wrote the foreword and helped Laurie with the book jacket.
During his editing years, Brazzil wrote a front-page column Star Dust.
Several of these are printed as the final chapters in his new book. Others, Im sure, can be found among the clippings friends and subscribers secured down through the years.
These same friends and subscribers can greet Editor Brazzil, once again, January 25 from 6 to 8:30 p.m. at the Highlands Community Center. While there, shake hands with Jim. Whats a little printers ink among friends?