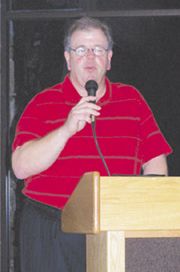 By BOBBY HORN JR.
CROSBYThe New Property Owners Association of Newport (NPOAN) continues a period of transition as they adapt to a new management company and slight change in the makeup of the board of directors.
Last week, over 150 homeowners attended the annual meeting of the NPOAN. The purpose of the meeting was three-fold: to give homeowners a overview of the past 12 months and what to expect in the future, present the 2007 budget and elect directors.
New management

Board President Dan Kasprzak began the meeting by relating the circumstances that led to the change in management companies from C.I.A. Services to Houston Community Management Services (HCMS).
During the second quarter of 2006, Kasprzak said, the NPOAN was notified by Harris County that they were not receiving payment for constable patrol services from the association. They later learned from Crosby State Bank that C.I.A. Services, which collected monthly dues from property owners, were not sending the checks to them.
The Board ordered an audit of C.I.A., which revealed that while there was no fraud evident C.I.A. had been paying bills late. During the audit, he added, $54,000 in checks were found sitting on a vice presidents desk waiting to be deposited.
After learning how much it would cost them to rectify the account, C.I.A. Services resigned on Oct. 31, 2006.
Over the next two months, Kasprzak said, the NPOAN Board of Directors interviewed five or six management companies. In the end, the board chose to go with Houston Community Management Services, Inc., which was the first group they interviewed.
While the transition between the two management companies has not been seamless, Kasprzak said he was confident that in the end HCMS would provide a better service to the homeowners.
2007 Budget
The state of the financial situation is good, NPOAN Treasurer Walt Thomas said. At the close of 2006, the NPOANs finances were $57,000 better than they were the year before or 21 percent. In the 2007 budget, he said, an increase in income from various sources including investments will allow the association to double the amount of money it spent on repair and maintenance in 2006. Among the projects are tennis court repairs and maintenance, which were not in the 2006 budget, and twice as much funds allocated to lake and river repairs and improvement.
Directors election
With a 10-member board of directors serving, elections for three spots are held every year on a rotating basis. The 10th spot goes to a director who is appointed by developer Rampart Capital Corporation. When Rampart purchased the package of lots and amenities for $850,000 following the bankruptcy of former Newport development DDI, Rampart CE) Jim Carpenter required one seat on the board until such time as 90 percent of Newport is developed or Rampart owns five or less lots or 15 acres.
In the election eeven candidates faced off for three seats. Reelected to the board were Sam Gonzalez with 572 votes and Walt Thomas with 546. Dennis Pilkington replaces Shannon Ezell on the board with 528 votes.
Also collecting votes were Bruce Linday with 151, Arthur Tertyshny with 133, Ezell received 70 and Don Marshall got 53 votes.