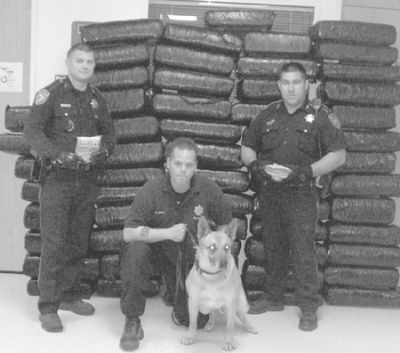 By BOBBY HORN JR.
EAST HARRIS COUNTYTwo Harris County sheriffs deputies made an unusual discovery last week when they pulled over a truck that was driving erratically: over 1,000 pounds of marijuana.
According to District Spokesperson Karen Jordan, Deputies C. Kowlis and J. OBrien were driving on Interstate 10 on March 10 when they saw a white Isuzu pickup with Alabama plates driving in an unsafe manner.
The deputies stopped the truck after observing it make several unsafe lane changes without signaling and nearly striking another motorist when doing so, Jordan said. As the deputies neared the rear of the truck, they immediately smelled a pungent odor of fresh marijuana around the cargo area.

The driver was identified as Phillip Farley, 34, of Quinton, Alabama. The passenger was Dorothy Lewis, 45, of Beaumont, Texas. Both seemed extremely nervous and gave conflicting accounts as to why they were in the Houston area Jordan added.
The deputies called for backup. Deputy Hoyt arrived on the scene with his canine partner Rocco. The certified narcotic detecting dog displayed two positive alerts at the rear cargo door of the vehicle to his handler.
Upon opening the cargo door, deputies discovered 14 cardboard boxes containing 58 bundles of marijuana, which totaled 1,085 pounds, as well as $36,000 in cash. Narcotic investigators estimate the street value of the marijuana to exceed $2.6 million. Both Farley and Lewis are each being held in the Harris County Jail on $5 million bonds awaiting trial.
The professional experience of both Deputies Kowis and OBrien prevented the distribution of the marijuana to our Harris County streets. Kudos to both on a job well done, Jordan said.