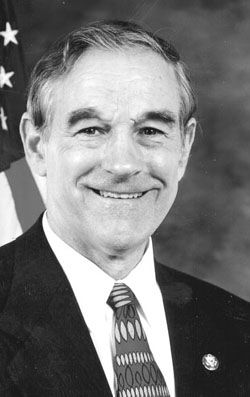 By BOBBY HORN JR.
CHAMBERS COUNTY Ron Paul, the U.S. Congressman for District 14, which includes Chambers County, announced this week his intention to run for president of the United States.
The announcement cam on Monday morning during the Washington Journal show on CSPAN.
This is the second time that Paul has sought the nations highest office. In 1988 he ran an unsuccessful campaign as the Libertarian Party Candidate. This time is seeking the Republican nomination.
Calling himself a strict Constitutionalist Paul said that he is running because he fells that the Republican Party has moved away from its roots and has become the party of big government. He is also a staunch anti-war advocate, being one of a handful of Republicans who voted against the countrys involvement in the war in Iraq.

Paul was elected to Congress in the seventies and eighties, and re-elected in 1996. He currently serves on the Financial Services and International Relations committees.
Paul has been called the taxpayers friend by the National Taxpayers Union and was named by the Washington Quarterly as one of the 50 most influential leaders in Congress.
While serving as a Republican in Congress, Paul has not lost touch with the Libertarian. He has, during his career in Congress, been recognized by organizations such as the National Taxpayers Union, Citizens Against Government Waste, the Council for a Competitive Economy and Young Conservatives of Texas.
He is also the author of several books, including Challenge to Liberty; The Case for Gold; and Freedom Under Siege.
Ron Paul and his wife of 45 years, Carol, make their home in Lake Jackson. They are the parents of five children and the grandparents of 16. A former Air Force flight surgeon during the 1960s, Dr. Paul is a graduate of Gettysburg College and Duke University Medical School. In his career as an obstetrician, Paul said that he has delivered more than 4,000 babies.